US abandons plans to test weapons

In the face of severe congressional opposition, the Clinton administration has extended its ban on testing nuclear weapons 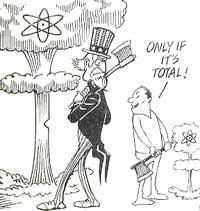 THE US has extended its nine-month moratorium on testing of nuclear weapons that expired in July. It abandoned plans to conduct nine underground nuclear tests and says it will not resume testing unless another country first conducts tests.

This marks a retreat by the Clinton administration in the face of congressional opposition. The plan to carry out the nine tests was drafted to appease members of Congress opposed to indefinite testing, but it only served to strengthen opposition to any testing.

The extension would please the Russians, who do not want to either incur the costs of further testing or encourage nuclear ambitions among its neighbours, especially Ukraine.

Critics say resumption of testing would undermine US efforts to win international support for renewing the Nuclear Non-proliferation Treaty after 1995.

Government officials had argued that some tests were needed to check safety upgrading for nuclear warheads carried by Cruise missiles. Opponents to testing had, however, said the safety improvements were of marginal importance compared with the goal of keeping other nuclear powers from resuming testing and the Third World from developing bombs of its own.