Asbestos-related litigation in the us runs into billions of dollars today. So much so that the amount is estimated to exceed the combined cost of destruction caused by 9/11 and Hurricane Andrew 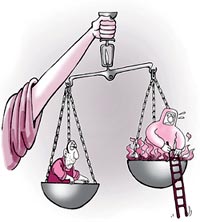 Asbestos-related litigation in the us runs into billions of dollars today. So much so that the amount is estimated to exceed the combined cost of destruction caused by 9/11 and Hurricane Andrew. The trend has been accentuated by a spate of new lawsuits against relatively less risky industries that used asbestos as a raw material, and damages sought by a large number of "unimpaired" claimants -- individuals who are not perceptibly affected by asbestos exposure.

The fallout from this several-decade-old legal wrangle: more than 60 companies have gone broke, and claims have cost the industry and insurers us $54 billion to date. The compensation sought is expected to mount to about us $265 billion, according to a report published by the Rand Institute of Civil Justice -- an independent research organisation.

Significantly, the asbestos litigation matter is under consideration by the us Senate Committee on the Judiciary to frame a law that would limit the number of claimants. The American Bar Association (aba) House of Delegates -- the world's largest body of lawyers -- also made its recommendations in favour of a change in legislation on February 11, 2003. It is noteworthy that the aba's pro-industry move comes on the eve of the proposals being taken up by the 108th session of Congress. These developments are indicative of the once-popular asbestos turning into a burgeoning financial liability, apart from its being a serious health hazard.
Asbestos is a strong and durable mineral. It is abundantly available, resistant to heat, acids and friction, and inexpensive to mine and process. Asbestos fibres have found their way into a range of industrial, maritime, automotive, scientific, building and consumer products. Over the years, many people have suffered ill-effects from the fibres as a result of handling these goods.

But in 1924, W E Cooke -- an English physician -- reported the first clear case of death caused by asbestosis in the British Medical Journal . His revelations led to further studies, which resulted in the passage of a law in the uk in 1931 requiring better ventilation in factories and periodic medical examination of workers. However, the us paid scant attention to the problem then.

In 1964, Irving Selikoff, director of Mount Sinai School of Medicine's Environmental Sciences Laboratory, New York City, and his associates conducted pioneering epidemiological studies on the health and mortality experience of 1,117 asbestos insulation workers. This research marked the turning point in the views held by doctors and health officials worldwide. The us Environmental Protection Agency responded in 1970, passing the Occupational Health and Safety Act. Strict safety rules governing workplace exposure to asbestos were put in place.

Researchers identified four basic diseases caused by the asbestos fibre: mesothelioma, lung cancer, asbestosis and pleural thickening or plaques (see: 'Sitting Ducks', April 15, 2002). Some of these diseases have a latency period of up to 40 years.

Suits for damages were filed in the us as early as the 1930s when workers afflicted by asbestosis moved court against Johns-Manville (jm) of New York City and Raybestos-Manhattan (rm) of Bridgeport, Connecticut -- then the largest and second largest asbestos manufacturers, respectively. In a report published in 1985, Paul Brodeur of the Boston University School of Public Health alleged, "The two firms, together with other leading asbestos manufacturers, initiated a cover-up of the asbestos hazard that continued for more than 40 years."

In another case, reported in the Seattle Post-Intelligencer in February 2000, it was mentioned that "the fear of losing profits had prompted industry leaders to fight regulations". It quoted E S Wood, the executive vice-president of construction company W R Grace -- which filed for bankruptcy reorganisation in April 2001 -- as having written in an internal memo on May 24, 1977: "We believe that a decision to affix asbestos warning labels to our products would result in substantial sales losses."

The widespread use of the product and the consequent exposure of a large number of workers were perhaps the immediate causes of the problem. However, attempts by the industry to hold back information precipitated the crisis and ushered in the litigation saga.


Following the Selikoff studies, in 1965 the American Law Foundation defined tort law -- civil wrongs recognised as grounds for a lawsuit -- to make the sellers of all unreasonably dangerous products strictly liable to consumers unless their products carried adequate warning labels.

When the first product liability lawsuit was won in 1971 and later upheld by the us federal court of appeals in 1973, a precedent was set that led to about 15,000 suits being filed in the next 10 years against more than a dozen asbestos insulation manufacturers. Large compensatory damages were awarded to ailing asbestos workers and the next of kin of those who had died of diseases caused by the mineral.

Asbestos manufacturers vigorously defended themselves, and litigating individual claims became expensive and risky for plaintiff law firms. By the mid-1980s, however, it was realised that asbestos defendants could be taken on by bunching several claims. This pushed the us asbestos industry -- facing mass personal injury claims -- on the back foot and it chose not to aggressively contest liability. Instead, the companies negotiated settlements. Judges encouraged large-scale dispute resolution.

Since asbestos claims involve joint and several liability, even firms that are associated with the mineral indirectly have to bear the responsibility of defaulting asbestos manufacturing companies. Consequently, in recent years, plaintiffs have started filing claims for asbestos-related injury against less risky industries and occupations. The list of defendants now spans 75 of the 83 different types of industries in the us. Claims are even spreading to the deep-pocketed automobile industry, which used asbestos in its brake lining.

Along with the shared liability aspect, the new lawsuits have become a hotly debated issue over the legitimacy of the damages sought by "unimpaired" claimants. The term literally refers to people who show no "functional impairment" or those who experience no decrease in the ability to perform the activities of daily life. But the American Medical Association's definition of impairment implies that even a scar on the lungs would be considered "impairment", irrespective of "functionality".


The surge in asbestos claims in the us has put pressure on an economy that is already teetering on the brink. In a testimony to the us Senate Committee on Budget on January 29, 2003, Michael E Broody, chairperson of The Asbestos Alliance, stressed: "Asbestos litigation is an anchor weighing down the business community, particularly the manufacturing sector, and slowing down our overall economic recovery." The alliance is a group of manufacturers, insurers and lawyers seeking legislative reform to limit the number of claims.

The Senate Committee on the Judiciary may propose aba's recommendations to Congress to formulate a law that seeks to address this issue. The suggested steps include:

• Exempting potential claimants from statutory deadlines for filing such claims until their condition fulfils the stipulations.

Currently, in most us states, the sooner the court is moved after the disease (even minor ailments) is diagnosed, the higher the probability of winning damages.

In its suggestions, the aba argues: "The proposed resolution would benefit both plaintiffs and defendants by protecting the right of the claimants when they suffer from asbestos-related diseases and preventing the scarce resources from being misdirected because of a flood of premature claims."

On the other hand, Mary E Alexander, president of the Association of Trial Lawyers of America, has criticised the proposal: "The aba's recommendations regarding complicated pre-filing medical standards serve only to discourage legitimate claimants from exercising their legal rights."

The last hearing of the Senate Committee on the Judiciary held in September 2002 was inconclusive. The March 2003 session too is likely to be stormy, what with the panel lacking unanimity on the issue.