US coast may open for drilling 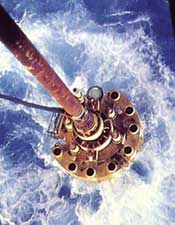 the us Senate is on the verge of passing a bill, which would not only allow oil and natural gas drilling in the Gulf of Mexico, but also jeopardise a 25-year moratorium on oil drilling along the us coast. The bill, sponsored by Republican senator Pete Domenici, calls for opening up 3.3 million hectares of coastal waters off Florida and sharing billions of dollars in federal drilling royalties with four Gulf Coast states -- Texas, Louisiana, Mississippi and Alabama.

Republicans flaunt this measure as the only solution to control soaring gasoline prices, which has now started hurting Americans. They are also opposed to any widening of debate to include possible amendments on automobile efficiency standards and other alternative energy options. However, because of the upcoming midterm elections for senate and house representatives this year, many see this move as a political gimmick.

Coastal states fear the bill because the us coast has been off development limits, largely because of concerns that drilling could jeopardise beaches and a lucrative tourist industry. Some critics of the legislation say that it will be years before any oil or gas will be taken from the proposed sites and that the legislation falls short of addressing many of the country's energy problems.

The business interest is seeing this as a window of opportunity, which can be exploited to get more concession for drilling oil and natural gas, when the need for more domestic energy has become apparent. Meanwhile, lawmakers from states like Virginia and Alaska want the bill to include provisions that would allow their states to share revenues received from energy production that occurs off their coast, whereas others believe states should not receive substantial revenues from drilling that occurs in federal waters.

The precedent for this current bill was set a month ago when the us house of representatives approved a legislation, lifting a 25-year ban on oil and natural gas drilling, off most of the Pacific and Atlantic coasts. The legislation, which was passed by a vote of 232-187, offered states billions of dollars in federal revenues if they allow drilling off their coasts. This provision has sparked objections from officials in the Bush administration, who fear loss of federal revenues will be telling on the budget deficit. As both measures talk about sharing federal royalties from oil production with state governments, it can create a powerful incentive for cash-strapped states to grant offshore leases.