US frames new rules for mining 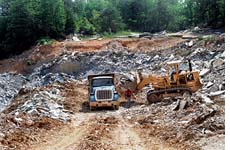 The us Department of the Interior's Office of Surface Mining (osm) has proposed new rules for large-scale mining operations that would give operators wider leeway to bury streams and mountain headwaters with rock and other mining waste.

Under the regulations, osm proposes a change in the enforcement of a 1983 rule known as the stream buffer zone rule, which prohibits valley-filling or mining activity within 100 feet of mountain streams.

As per the proposal, surface coal mine operators would have to show that they only intend "to prevent, to the extent possible using the best technology currently available", such damage. Operations involving the use of "stream crossings, sedimentation ponds, permanent excess spoil fills, and coal waste disposal facilities" will no longer be subject to the buffer zone rule. The proposals has now been posted for public comment.