US headed for megadroughts

The second half of the 21st century will bring severe droughts in vast parts of US, says study 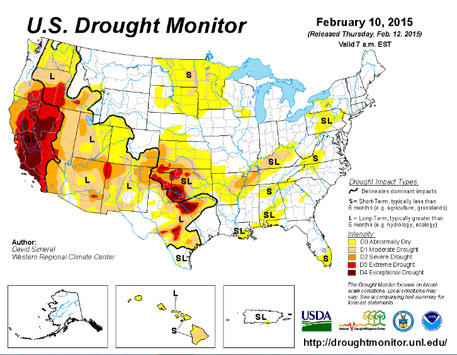 Regions in southwestern US and the Central Plains in western parts of North America will face decade-long droughts in the second half of the 21st century due to rising temperatures and dry conditions caused by human-induced factors “driven primarily” by “increased greenhouse gas concentrations”.

According to a study published in new online journal Science Advances on February 12, the droughts will be more severe than any drought witnessed in the region in the past thousand years—and these regions have seen numerous “megadroughts” in the middle ages.

“These regions nevertheless experienced extended Medieval-era droughts that were more persistent than any historical event providing crucial targets in the paleoclimate record for benchmarking the severity of future drought risks,” says the study.

For the study, the researchers used data from North American Drought Atlas created in 2009 by Lamont-Doherty scientist Edward Cook. Cook had undertaken a study of tree rings from tens of thousands of tree samples across the United States, Mexico and parts of Canada. The atlas reconstructs the history of droughts for the previous 2,005 years. It also used 17 computer models of droughts and three models of soil moisture to predict droughts in the next 100 years.

“We use an empirical drought reconstruction and three soil moisture metrics from 17 state-of-the-art general circulation models to show that these models project significantly drier conditions in the later half of the 21st century compared to the 20th century and earlier paleoclimatic intervals,” says the study.

According to the US Drought Monitor, vast parts of western US, from California to Texas and Oklahoma, have seen droughts in 11 of the past 14 years. “More than 64 million people are directly affected by drought in the Southwest and Southern Plains, and far more are indirectly affected because of the vast number of farms, orchards, and ranches that supply the rest of the United States,” according to a report published by NASA.