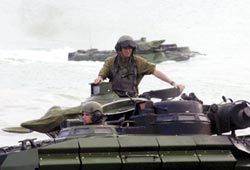 An acute crisis has hit farmers and fisherfolk in Ecuador's Manabi province, around the us military's Manta air force base. The latter got to use the area for 10 years in 1999 to control drug trafficking. But security measures Ecuador enforced to protect us soldiers are proving too expensive for locals. The Manta base is part of a large military complex, including the Jaramijo navy base, spread over 24,000 hectares (ha).

"The port at Manta has been militarised now and the boats of small-time fisherfolk are not allowed to dock," complains Hugo Mero Quijije, president of the Manta Association of Fishing Boat Captains and Sailors. People are also resisting a plan to introduce paid training courses and identification cards to certify them as 'fisherfolk'. Small fisherfolk without motorboats are threatened by the conversion of one nautical mile of the sea from the shore into a marine reserve, where fishing would be prohibited.

Authorities have also arbitrarily confiscated more than 10,000 ha land around the Jaramijo base. "We plant our land every year, with or without the permission of the base commander. But now, they have kicked us off the land just as the harvest is about to start," rues Tiobaldo Vlez of the Committee of Communities Affected by Jaramijo Navy Base.