US puts a price on Sri Lanka's forests

The US congress has reportedly approved a $5-million waiver, thereby quantifying the debt-for-nature swap offer made to Sri Lanka more than two years ago. It is widely believed that this sum is peanuts, considering that Sri Lanka owes the us close to $1 billion and that the latter would establish control over a sizeable chunk of the island nation's forest wealth if the deal is struck 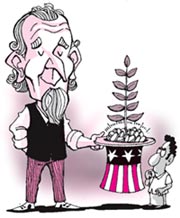 the us congress has reportedly approved a us $5-million waiver, thereby quantifying the debt-for-nature swap offer made to Sri Lanka more than two years ago. It is widely believed that this sum is peanuts, considering that Sri Lanka owes the us close to us $1 billion and that the latter would establish control over a sizeable chunk of the island nation's forest wealth if the deal is struck.

The us had initially put forward the proposal in April 2001 under its Tropical Forest Conservation Act (tfca) of 1998 (see: Debt trap, October 31, 2002). The tfca allows developing countries to divert amounts meant for loan repayment towards domestic forest management activities. The catch is that as a quid pro quo the us gets to have a say in conserving the debtor nations' rainforests.

In Sri Lanka the mechanics of the scheme would involve creation of a fund in local currency, into which the government will pay its dues. The amount deposited will be equivalent to the value of debt reduction, allowing the country to save foreign exchange. A board -- mainly comprising members of the civil society, but also including a representative of the us government -- would administer the fund. The us has earmarked the money for the following activities:

• Establishment and maintenance of parks and protected areas

• Imparting training to organisations and individuals working in the field

• Research and identification of medicinal uses of tropical plants

• Development of livelihoods of people living in or close to protected areas.

Sri Lanka's forest department had declared in 2001 that the programme would not yield any tangible benefit. On the contrary, it was likely to enable a foreign power to influence domestic forest management policies. At that time, the us embassy in Colombo stated that the choice was up to the Lankan government.

The debate over whether or not such an agreement should be entered into with the us is still raging in the island nation. Today, too, environment ministry and forest department officials are viewing the project with scepticism. The biggest fear of those opposed to the tfca proposal is the threat it poses to Sri Lanka's biodiversity resources.

In originally rejecting the offer, the then forest conservator, Herath Mudiyanselage Bandaratilleke, had contended that there weren't enough safeguards against biopiracy and there was no control over us institutions seeking research rights in local forests. Lankan non-governmental organisations (ngos) Environmental Foundation Limited (efl) and Green Lanka Movement echo this sentiment. "We must know clearly whether the agreement will harm Sri Lanka's ownership of its tropical forests and the resources contained in it," asserts an efl spokesperson.

But Rohan Pethiyagoda, adviser to environment minister Rukman Senanayake, has sought to allay apprehensions. "Having examined the inter-governmental agreements through which tfca is implemented in some other countries, I am of the view that there is no significant risk to national interest and Sri Lanka should accept this benefit," Pethiyagoda wrote in a local weekend newspaper on July 13.

efl has also voiced strong objection to the proposed deal on the ground that the amount of debt reduction to be achieved would be grossly inadequate. "How do you weigh the worth of your forests?" asks the efl representative. Intriguingly, Thosapala Hewage, secretary, environment ministry, appears to be unaware of the development. This despite the fact that in June 2003, the environment ministry itself had informed the media about the sum being offered by the us. Hewage has told Down To Earth that if the figure being quoted is correct, it is too measly to be considered.

Sri Lanka became the sixth country to be approved for benefits under the tfca. Peru, El Salvador, Belize, Bangladesh and the Philippines have all inked pacts with the us earlier. The us is at present negotiating with a number of other countries, including Thailand. "The tfca cannot be rejected outright, but we must work out the best deal for Sri Lanka," feels Hewage.

Unfortunately, though, the us offer has been made at a time when the country is most vulnerable economically. Sri Lanka's foreign borrowing has skyrocketed during the 20 years of civil war. Today, each citizen owes us $780 to donors and developed nations. The final word is, therefore, expected to come from the finance ministry. In all likelihood, it will put greenbacks ahead of green issues.