US says it will not extend commitment on climate mitigation efforts 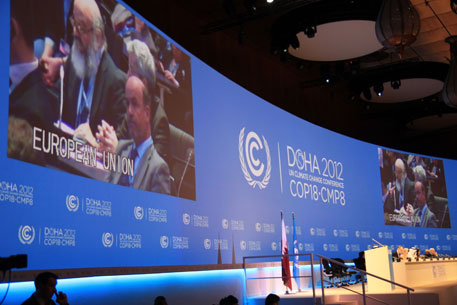 The swords and daggers are still not out. Going by previous experience of climate change conferences, the big fights are generally kept for the last week of the conference, ceremoniously known as the high-level segment. However, on the opening day of the 18th Conference of Parties (CoP18) in Doha, Qatar, parties reaffirmed their positions, on which each will try to consolidate its position over the next two weeks. Although Doha seems to be just another milestone to mark the setting-up process of a new treaty in 2015, based on the Durban Platform to be implemented from 2020, the ensuing two weeks will see confrontations, if not fisticuffs on numerous contentious issues that need to be settled before 2013. And in one of the several press conferences held on the first day, the United States, a party that has always shied away from taking on carbon emissions reduction, made this clear.

Jonathan Pershing, deputy head of the US Climate Change team, said at a press conference on Monday that his country will not extend its ambition beyond what it committed in 2009 in Copenhagen at CoP 15. “I do not anticipate the United States will, in the pre-2020 timeframe, modify the commitment made in the political context under the agreements reached originally in Copenhagen, and affirmed in Cancun for something approaching, in the context of legislation, 17 per cent below 2005 levels by 2020,” Pershing said. For the US, according to the negotiator, CoP18 is a transitory conference, “closing of one chapter and opening of another”.

The next eight years will play a crucial role in bulwarking the planet against the damaging effects of climate change. Ambitions on reducing atmospheric CO2 levels is missing, was one of the key messages that emanated from the developing countries. Pa Ousman Jarju, a negotiator from Gambia and chair of the Least Developed Countries (LDCs), made it clear that his negotiating bloc would like to see more from the developed world on ambition, irrespective of whether they had signed the Kyoto Protocol (KP) or not.

“We want to see the LCA (long-term cooperative action) conclude successfully and we want to see a single track which is the Durban platform,” said Jarju, adding that the LDCs want a fully operational Bali roadmap; this includes the adaption committee, the green development fund and technology and issues related to capacity building.

EU not keen on raising ambition either

The European Union, which has so far insisted on the second commitment period of KP, is not keen on raising its ambition. For the second commitment period, the EU had maintained that it would reduce carbon emissions 20 per cent of 1990 levels.  But the EU delegation thinks with the current recession getting over in the next few years, emissions from the continent is also set to rise, making it difficult for them commit more. The developing countries want the EU to cut down emissions beyond 35 per cent by 2020. Currently the EU claims that it has managed to reduce emissions by 17 per cent with a little help from the economic recession. Artur Runge-Metzger, a member of the delegation, said the ramping up of targets to 30 per cent emissions reduction is possible, but other major economies must also show equal amount of ambition.

In May, 2012, a new group was formed by the developing countries called the Like-Minded Developing Countries (LMDC). The group consists of 20 developing countries, including India and China. LMDC, through a series of meetings with G77 countries, has managed to come to a common position on behalf of the developing world.  Negotiators from this bloc want the elements of the LCA and the Bali roadmap to be kept alive. These elements include equity, finance, technology, intellectual property and the global peaking year. A senior negotiator for this said that, it would be futile to start negotiations from scratch under a new protocol that will emerge from the Durban Platform beyond 2015 (See ‘what LMDC wants’).

As countries take their positions, the ensuing weeks will see a lot of drama on how to steer the climate change negotiations. On the last day of negotiations in the previous climate conference in Durban, only a part of the puzzle could be solved. Now every negotiating block would want to put their strategies on the table. Would Doha become another non-descript battleground where parties haggle over who is emitting and how much? The next fourteen days will provide an answer.