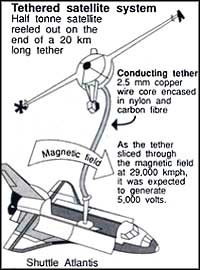 In an ambitious Italian-US experiment, the crew of space shuttle Atlantis tried to release an Italian-made satellite tethered by a 20-km copper cord into orbit -- and failed, when the release mechanism jammed repeatedly. The scientists had hoped to learn about new ways to power spacecraft and how to use, cables to drag instruments through the upper atmosphere. If the recent attempt had worked, the satellite and the space shuttle would have orbited the earth 20 km apart for 31 homes, after which the sattelite would have been reeled in to be brought back to earth for re-use.

The copper cable was expected to generate as much as 7.5 kw of electrical power as it swept through the earth's magnetic field. The flow of electric current would have been possible because both satellite and shuttle were to passed through the ionosphere -- the third layer of the atmosphere that reflects radio waves and extends about 1,000 km from the Earth's surface -- which has conduction properties and so could be used to close the circuit. The cable, only one tenth of an inch in diameter, is sheathed in nylon, insulated with Teflon and protected by the same material used in bullet-proof vests.

The shuttle was designed so that an electron gun attached to it would fire ions into the ionosphere, thereby allowing electrons to flow from the ionosphere to the positively charged satellite, down the tether and back to the shuttle.

The satellite's instruments were designed to relay information to physicists on the interactions between the current in the tether and the ionosphere. Engineers also hoped to monitor the system's mechanical behaviour, to measure the tension on the tether and to check it for unwanted oscillations.

The US$ 360 million experiment, conducted by the shuttle's seven- person crew, came to naught as the tether release system jammed on four different occasions. The satellite drifted to only about 250 metres away and generated less than one watt before the frustrated crew hauled it back on board.