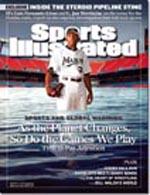 Sports and fashion magazines in the us are into serious issues now. Sports Illustrated, ELLE, Outside Magazine and The Atlantic Monthly are coming up with features on climate change. The cover of Sports Illustrated's March 12 issue tells sports buffs how a warming world will change the state of play. 'As the Planet Changes, So Do the Games We Play Time to Pay Attention,' says a headline on the cover, showing baseball pitcher Dontrelle Willis. The cover story says climate change could mean faster balls and less timber for bats. It could also force golf courses to live on less water. On its April cover, Outside features California governor Arnold Schwarzenegger who tells readers how he got General Motors to make a hydrogen-fuelled versions of vehicles.elle has invited Hollywood environmental activist Laurie David who produced the Oscar winning documentary on climate change, Inconvenient Truth, to be the guest editor for its green issue in May. The Atlantic Monthly's cover story for April is "Global Warming Who Loses-and Who Wins". This is a guide to how we all might get along in a warming world, it says.