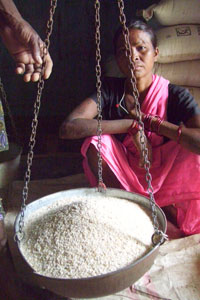 The Public Distribution System (PDS) of the country has not yielded benefit to the extent intended due to corrupt implementing machinery. This was the observation of the Wadhwa Committee, which has recommended a slew of measures to make the the system robust and bring transparency to it.

The committee, headed by former Supreme Court judge D P Wadhwa, was set up in 2006 following an order by the apex court, which was hearing a petition by People's Union for Civil Liberties, a human rights organisation. The committee was assisted by N C Saxena, commissioner of the Supreme Court on right to food. Taking the committee’s report on board, a bench of apex court has asked states to respond to the report.

Collusion between persons involved in the PDS supply chain, from fair price shop dealers, responsible for distribution of food grain at the grassroots level, to transporters, bureaucrats and politicians, is resulting in leakage of food grains, the report says.

The committee has recommended adoption of modern technology, for instance computerisation of PDS beneficiaries, to bring transparency to the system. Besides, it says, private individuals should not be allowed to operate fair price shops and that these be phased out. Their place should be taken over by state-level corporations, panchayati raj institutions or registered self-help groups. This will help check pilferage in PDS.

To monitor the system, the committee recommends formation of a Civil Supply Corporation at the state level. As of now there are many vigilance committees to monitor the distribution of foodgrains but they are almost defunct. There is no check on the foodgrains supplied to the state by the Food Corporation of India or brought by fair price shop dealers for distribution to people below the poverty line (BPL).

The committee recommends a clear division of responsibility between the Centre and states. While the Centre should be responsible for procurement, storage, transportation and bulk allocation of foodgrains under PDS, states should bear the operational responsibilities such as allocations to fair price shops, identification of below poverty line families, issuing of ration cards and supervision and monitoring of functioning of fair price shops.

In a step towards the universalisation of PDS, the committee recommends doing away with APL (above poverty line) list, meaning everyone should be entitled to PDS.

However, as immediate measures, the committee has asked the Centre to increase storage capacity, ensure timely supply of food grains, monitor fair price shops and set up complaint redressal system at the grassroots level. Reiterating two Supreme Court orders, passed in connection to the right to food case, the report recommends cancellation of the licence of fair price shop dealers who are found involved in malpractices like selling the foodgrains in the black market, not providing foodgrains to BPL families at the government-prescribed rate, making false entries and not keeping the shop open during the stipulated time period.