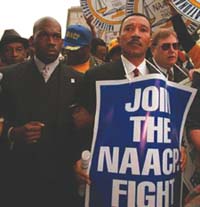 The us's National Association for Colored People will hold a symbolic funeral for the word "nigger" at the organisation's annual convention in July as part of its campaign to end the prevalence of racist and sexist language, images and concepts in the media.

"Our unit in the youth and college division is focusing on how badly blacks and other ethnic minorities are treated in the media," said Hilary Shelton, the group's Washington bureau director.

The targets of the campaign are record and television industries and recording artists. Another of its missions is to get the music and entertainment industries to voluntarily stop tolerating the use of derogatory terms for women--commonplace in popular rap recordings.

Holding symbolic funerals to demonstrate the end of a racially discriminatory practice is a common practice for the National Association for the Advancement of Colored People. In the 1960s, the organisation held a funeral for the segregationist Jim Crow policies in southern usa and most recently held a funeral for voter apathy.