Setting up an advance warning system has also been suggested

Any new construction around the Kedarnath shrine in Uttarakhand should be banned, says a preliminary recommendation report, released by Dehradun-based Wadia Institute of Himalayan Geology (WIHG). While the initial report by the institute has been sent to the government of India, the WIHG is preparing a final report which is likely to be completed by the first week of November.

“We have recommended a ban on all construction activities in the shrine area,” said D P Dobhal, senior scientist at the WIHG. Some construction can be permitted around 2 km downstream of the shrine, where the state government has set up a shelter house for pilgrims. However, all such activities will have to be strictly monitored, he added. It has also been proposed that not more than 100 people should be allowed to visit the shrine at one time.

The report also talks about several huge boulders brought down by floodwater from the higher areas, which settled behind and around the Kedarnath temple structure. One such boulder, resting behind the shrine, is nine metres long and three metres high. It is believed that this boulder prevented the temple from any major damage. Also, the flood fury left five to six feet height debris around the temple. “We have recommended that these boulders should be left untouched because it was a natural phenomenon and the region is in a fragile state. Also, it is not clear where the debris will be deposited if removed from here,” said Dobhal.

Setting up an advance warning system in the area is another highlight in the report. “This was one of the biggest learning for us from the disaster,” said Dobhal. The members working on the final report are particularly looking at how the drainage system around the shrine can be improved. 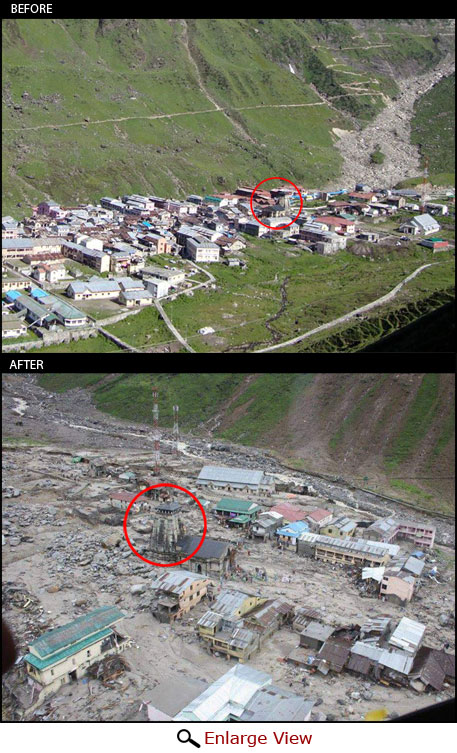 The impact of torrential rainfall in Kedarnath, Uttarakhand, India during June, 2013