Uttarakhand to declare missing persons as dead by July 15 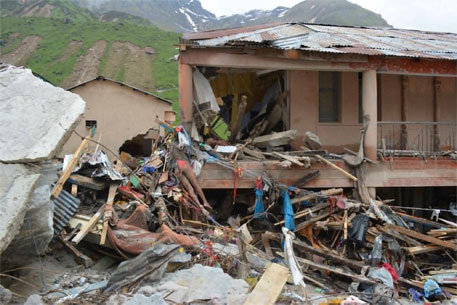 As Uttarakhand starts to pick up the pieces in the wake of the devastating floods of mid-June, the state government is preparing a list of missing persons who would be presumed dead if they do not return home or call their relatives by July 15. Under normal circumstances, people who have gone missing are declared dead only if they have not been heard of for 7 years.

The government has taken a decision to quickly settle claims for compensation from people who lost family members or property in the floods. A comprehensive list of the missing is being prepared and extra care is being taken to weed out duplicated names, says Ajay Pradyot, senior secretary to the Uttarakhand government, who is in charge of compiling the list.

“More than 3,000 people, mainly tourists and pilgrims from other states, are missing. Another 650 people, who are residents of Uttarakhand, are also missing. The list will be published soon but it will be provisional and could be updated from time to time,” says Pradyot.

Pradyot also explained that government officials have been repeatedly contacting families of missing people to enquire whether the person has returned. “Even though we have created a network on social media, it is unlikely that people who return after facing such an ordeal would log in immediately after reaching home. So it is necessary to call their families on the numbers that are present in our database,” he says.

The last official number of missing people, says Negi, is 3,068. However, this number may also include Nepalese who could have either crossed the border now or could be in Uttarakhand. The list is also being prepared on the basis of FIRs (first information reports) registered at various police stations. So far, 973 FIRs for 3,078 missing persons have been lodged.

A government official, who does not wish to be named, believes that such a move could put the government in the dock. Several people are waiting at Jolly Grant Airport, Dehradun, for their missing family members. They are so agitated that they are now planning to form groups and go to Kedarnath, Gaurikund, Gaurigaon and Rambara to look for their relatives. “Hardly a week is left for the state to declare missing people dead. What if the families don’t agree? A month is too little a time,” says the official.

Though Pradyot cannot give an exact number of people who have died in the tragedy, he says that 100 bodies have been cremated so far. The police control room in Uttarakhand says the toll is more than 3,000.
Meanwhile, inclement weather is posing hurdles in the way of cremating the dead. Twenty three bodies could be cremated on July 5 at Gaurikund and Junglechatti after the weather cleared. Rain was forecast for the next three days, with heavy rains on July 8. The state government has also requested the Centre to provide 238 more medical specialists who specialise in anaesthesia, surgery, gynaecology, paediatrics and general medicine.