Uttaranchal Pollution Control Board contradicts itself on pollution in state 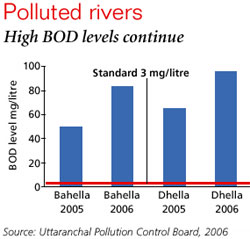 paper mills and distilleries in Uttaranchal are flouting pollution-control norms even though the State Pollution Control Board (spcb) claims that all is well. A study conducted by spcb in 2006, however, contradicts its own stand (see 'No respite', Down To Earth, November 15, 2006).

In response to a petition filed by Ajay Rawat, head of the history department, Kumaon University, on March 27, the spcb had filed a counter-affidavit in September which said that Rawat's petition is "presumptive", "imaginary" and "false". "Effluents discharged by these factories are within permissible norms," the affidavit states. "It is denied that the water contains pollutants in excess of permissible limits. It is further denied that the agricultural output has been reduced due to polluted water... no case of illness or death of livestock has been reported ...most of the agro-based paper industries have installed chemical recovery plants".

The 2006 study revealed that the effluents released by the mills has led to an increase in the Biological Oxygen Demand (bod) levels--an indicator of the amount of oxygen required by microorganisms to decompose organic matter in water--by 10 times the permissible limit. The spcb had declared the Dhella, Bahella, Kichha and Pilakhar rivers unfit for human consumption in 2005. Not much has changed since then (see graph Polluted rivers). But the spcb affidavit claims that "...an improvement in quality is observed".

With rapid industrialisation, the bod level of river Kalyani downstream at Pantnagar has gone up 6 times the value measured upstream. Kalyani is at the downstream of a cluster of chemical, petrochemical, polymer, plastics, pharmaceutical and other polluting units. But the affidavit contradicts, saying "...issued only when proper provision for control and prevention of pollution is made in the industry".