The latest in the array of contraceptives are vaccines against reproductive hormones. 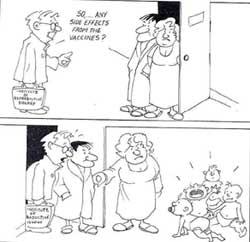 COGNISANT of the limitations of various contraceptives, scientists at the Indian Institute of Science (IISc) in Bangalore and at the National Institute of Immunology (NII) in Delhi have been trying to develop safe and effective contraceptive vaccines for both men and women. And, their efforts are soon to bear fruit.

Existing contraceptive methods have their drawbacks. Vasectomies -- the blocking of the tube that carries the sperm from the testes -- and tubectomies -- the tying up of a woman's fallopian tubes, which carry eggs to the ovary -- are regarded as irreversible. The use of condoms and pills is limited as people are not sufficiently motivated to use them. Other methods affect menstrual flow and often have other side-effects.

However, contraceptive vaccines, unlike most chemical contraceptives, mobilise the body's disease-fighting immune system to interfere with the fertility of both men and women.

The vaccine developed by the IISc team led by N R Maudgal, a professor at the institute's Centre for Reproductive Biology and Molecular Endocrinology, could render men infertile for about six months.

Explains Maudgal, "Our approach is to leave the primary male hormone -- testosterone -- alone so that male sexual drive and the development of secondary sexual characteristics like body hair are not be affected and the vaccine becomes more acceptable to men."

The scientists are targeting the follicle stimulating hormone (FSH), which stimulates the production of sperm. After studying bonnet monkeys for several years, the scientists discovered that if a monkey is vaccinated against this hormone, antibodies produced by the immune system destroy all the FSH present in the blood.

The scientists found FSH obtained from freeze-dried pituitaries of sheep, led to the formation of FSH-destroying antibodies in the monkeys. These antibodies destroyed the ovine FSH and interestingly, also reacted against the FSH produced by the monkeys, reducing the level of the hormone in the blood. Because human FSH, monkey FSH and ovine FSH have similar structures, the antibodies produced in response to ovine FSH can inactivate the hormones of all three.

For the vaccine to be effective, a booster shot is required every three months. When the booster was withdrawn, the monkeys started producing normally massive amounts of healthy sperm. The vaccine tested on the monkeys was found to be safe and non-toxic. The Drug Controller of the Government of India has now cleared the vaccine for phase-1 safety trials in humans.

Maudgal and his team are also exploring producing antibodies to FSH receptors -- cells in the testes that recognise the FSH. "Such an approach would be highly viable," explains Maudgal, "as the number of such cells is limited, making them easy to target."

Other scientists at IISc are trying to produce the ovine hormone using genetic engineering techniques. "This," says Maudgal, "will ensure we get pure, bacteria- and virus-free FSH in large quantities."

The contraceptive vaccine developed by NII scientists targets the human chorionic gonadotropin (HCG) hormone in women. This hormone induces the ovary to continue producing the hormone progesterone, which is necessary to prepare the uterus to receive the embryo. Blocking HCG ensures termination of pregnancy.

NII scientists have been working for the last 20 years to develop this vaccine. Claims G P Talwar, former NII director and presently professor of eminence at the institute who has been closely associated with the project, "This is the most advanced birth control vaccine in the whole world today." The NII group is the only one that has successfully shown that its vaccine is safe and effective in women, he explains.

"Our vaccine," says Talwar, "does not affect menstrual regularity or increase bleeding; it is reversible and the user does not have to remember to take it everyday."

Normally, women do not show an immune reaction to HCG because it is produced by the body itself and is not foreign to it. To elicit a reaction from the body, the scientists modified the HCG molecule and found that after vaccination, the quantity of antibodies increased substantially, thereby reducing the levels of HCG. The scientists say the response is reversible, and after 300 to 500 days the antibody levels decline to almost zero. Once the effect of the vaccine wears off, women can become pregnant. Of the women who used the vaccine, five produced healthy babies once the effect of the vaccine wore off.

The vaccine has been through two clinical trials. In a one-year phase 1 trial conducted on a group of 100 women in five centres in the country, the safety of the vaccine was established. Phase-2 trials undertaken in Delhi and Chandigarh also proved the vaccine was effective. Moreover, the scientists were able to establish the minimum quantity of antibodies essential to ensure protection against pregnancy.

But, admits Talwar, "There are still several problems that have to be overcome." For one, the vaccine has to be given in three doses at six-week intervals, and it takes about three months for it to become effective. In this intervening period, women have to be protected by another contraceptive.

Attempts are now being made by several NII scientists to develop polymers that will allow the slow release of multiple doses of the vaccine, which can be administered in a single shot.