WHO accedes to paediatricians' concern over Hepatitis B 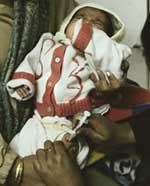 the inclusion of Hepatitis b vaccine in India's universal immunisation programme (uip) could be stayed till there is adequate data on the vaccine's efficacy. Following a meeting on March 3 in New Delhi, between who officials and Indian paediatricians, the un body said it would look into the doctors' concerns regarding the efficacy and cost-effectiveness of the vaccine.

It said, if required, they would ask the Union government to hold off on implementing the programme.

India is in the process of introducing Hepatitis b vaccine in a phased manner. So far, the government has dismissed health experts' concerns regarding the vaccine, saying the programme follows who recommendations. who aims to introduce the vaccine in all the countries by 2007.

The paediatricians contend that though the vaccine needs to be given at the time of birth to ensure that the disease doesn't pass from mother to child, infants here are given this inoculation, along with the dtp vaccine, six weeks after birth. But, there is no information on this late inoculation's effectiveness. who as well as a 2003 pilot project in Andhra Pradesh, don't provide much information on this either.