Value for every drop 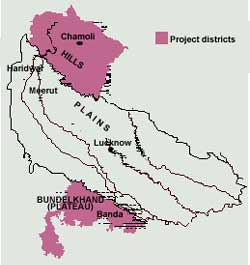 in late June, when the approval of the us $59.6 million loan from the World Bank (wb) for the Uttar Pradesh Rural Water Supply and Environmental Sanitation Project (uprwsesp) was announced, it did not sound like the beginning of something new. But the staff appraisal report (sar) of the project dated May 28, 1996, reveals that the project was heralding the entry of privatisation into the hitherto government-dominated sector of rural water supply. The director, project management unit (pmu), Parmeshwaran Iyer said that this is the first time in India that rural water supply is being privatised on such a scale.

Although all this is happening in the name of community participation, there is little likelihood of genuine community participation in the manner the project has been designed. For example, the eligibility criteria of service organisations (sos) -- which are to take up the scheme and implement them in the villages -- imply that no community can take up the scheme itself. The criteria is likely to leave out a number of genuine organisations that could really make it a participatory scheme. The fact that the sos are selected first by the pmu, who in turn select and convince the villages, means that the communities cannot select their own sos.

Secondly, in a country like India, performance of the government does not inspire great confidence even in traditional regulatory areas like pollution control or crime control. Then how will it be assured that the private parties will construct the schemes properly and the socially and politically weaker sections of the villages like scheduled castes or tribes get water? Mere representation in the Village Water and Sanitation Committees (vwsc) will not help. The project authorities, however, are confident that communities will ensure that the schemes are constructed properly.

The fact that the vwsc are bodies elected by the communities, to whom, the panchayats have been asked to delegate powers for its proper functioning, is another contentious issue. As L C Jain, noted expert on panchayats said, such dilution of panchayati raj institutions by a plethora of independently elected sub-committees is not desirable.

The uprwsesp is to cost Rs 300.76 crore and is to cover 1000 communities in eight hill and foot-hill districts and five Bundelkhand districts of up, with about 0.8 million population. About Rs 250 crore will be used for the selection and construction of the schemes. Thus, the cost for a community of 800 people comes to Rs 25 lakh. This is very high even for the most problematic of hilly villages. The explanations forwarded by wb and the up government were at variance with each other. G V Abhyankar, a senior official with the wb, said that this is not very unusual, as in some of the hill villages, the government has spent up to Rs 20 lakh. Iyer finds the cost to be too high as substantial amount of the money is spent on 'software'. But the question is, if this is the norm, then the country will need a whopping Rs 1,40,725 crore for the 43.3 per cent of the 13 lakh habitations that remain to be fully covered as per the government's 1994 survey.

Strangely, the project makes provisions for two international experts for community development. wb officials refused to comment on the provision. Moreover, the report says that "projects in other countries have found that sos often seek out less favoured communities for assistance", implying that some automatic anti-poverty targeting is built into the project.

It is noteworthy here that the poorest of the people of the region will have to pay something like seven per cent of their annual income for initial investment in addition to seven per cent of their income for monthly operation and maintenance expenses. While there is no doubt that the people must be made to pay for water, there is a need to rethink if those who consume more should not be made to pay more to subsidise the minimal requirements of the poorest.