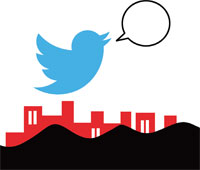 Old media still has an edge over social media when it comes to breaking news. But new media has inched ahead in disaster reporting. Scientists at the Edinburgh and Glasgow universities in Scotland developed a software algorithm to track Twitter activity.

They studied 51 million tweets over 11 weeks in summer 2011 and compared these with output from newswires, including the BBC, CNN, Reuters and The New York Times, for the same period. Miles Osborne, who led the study, said: “Twitter and traditional news outlets each have their strengths in terms of delivering news. However, Twitter can bring added value by spreading the word on events that we might not otherwise hear about, and for bringing local perspectives on major news items.”