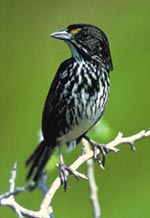 At least 114 types of animals have become extinct in the us due to the federal government's failure to implement the Endangered Species Act (esa). This aspect has been brought to light in a report by the Center for Biological Diversity (cbd), an environmental advocacy organisation based in Arizona.

The law had been passed in 1973. It requires that the us Fish and Wildlife Service as well as the National Marine Fisheries Service enlist animal and plant species that are endangered or threatened, designate critical habitat for them, and develop recovery plans. Some 1,250 species have been afforded protection by the esa. But the effectiveness of any law depends on its implementation, and a closer look reveals that many species have now been wiped out due to the federal government's lack of commitment. According to Brian Nowicki, the co-author of the report: "The (George) Bush administration has pushed the crisis to an unprecedented level."

Meanwhile, us administration officials admit that the law is often 'violated' and is in need of a major overhaul. Internal reports suggest that addressing the backlog of these duties would require some us $153 million. But only us $17 million have been sought for this year's esa budget. Furthermore, no species has been listed as endangered, except under court order.