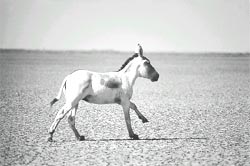 about 24 fauna species are likely to become extinct in Gujarat in the near future, states a new report. Fauna of Gujarat , the report, is part of a study conducted by the Zoological Survey of India ( zsi ). "The inventory of fauna is the first step towards knowing what we have lost and what is left to be conserved," said Qaisar H Baqri, a senior scientist with zsi . The report carries a list of 101 mammals, 452 birds, 89 reptiles, 18 amphibians and 606 fish species. It not only lists known endangered species but lesser known ones. "Nearly 90 per cent of the state's biodiversity stands destroyed," claims Sanat Chauhan, a forest official. Experts say that the report has considerable policy implications for the depleting biodiversity of the state. "The database on biodiversity is considered a prerequisite before starting any developmental projects either at district or village level. Such information guides us in the sustainable use of any component of biological resource," opines Baqri.