India lost about 5,550 sq km of forest cover in the last two years. Andhra Pradesh and Madhya Pradesh were the worst hit 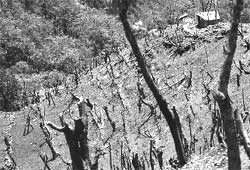 according to The State of Forest Report 1997, released on February 6, India has lost about 5,500 sq km of forest cover in the last two years. Madhya Pradesh lost 3,969 sq km and Andhra Pradesh, 3,822 sq km. However, in Maharashtra, forest cover has increased by 2,300 sq km.

The State of the Forest Report 1997 is the sixth report in the series published by the Forest Survey of India since 1987. For the first time the report contains statistics for hill and tribal areas.Of the total of 3,969 sq km forest lost in Madhya Pradesh, tribal areas accounted for about 2,186 sq km. And in Andhra Pradesh, about 3,455 sq km of tribal areas were lost. The trend of forest loss continues in the Northeast also, with Assam losing 237 sq km - about one per cent of its forests.

In Andhra Pradesh vast tracts under the control of extremists could not be verified by cross-checking the remote sensing data with field information. For the first time, the digital cartography system was used for Maharashtra and Madhya Pradesh.

In 1995 report, forest fires, jhum cultivation and non-regeneration of degraded forests were identified as the causes for the vanishing forests. But this latest report does not analyse the causes of forest destruction.