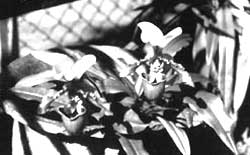 illegal experiments on medicinal plants and flowers are leading to the extinction of several indigenous varieties of biodiversity in Darjeeling. The rich biodiversity is endangered due to the apathy of the forest authorities.

Floriculture in Darjeeling hills -- particularly around Kalimpong, Takdah and Mirik -- is one of the main occupations of the people. Although floriculture is a major industry worldwide, it is a disorganised trade in Darjeeling. There is also very little experimentation and minimum profits. However, this has not deterred outsiders from conducting experiments. Due to the ban on the export of the wild varieties of flowers, manufacturers have developed a novel method of smuggling these flowers -- instead of taking the flowers, they are taking the seed. Other countries are experimenting with the flowers inside the forests, without the knowledge forest officials.

This illegal hybridisation has been going on for several years, says Bhisnu Malla, a landscape architect and member of Planner's Alliance for the Himalayan and Allied Regions ( pahar), a ngo based in Darjeeling . Rhododendrons and the wild orchids are the most endangered.

The other form of biodiversity which is endangered are the medicinal plants of the hills. "There are about 2000 varieties of medicinal plants here," says Nar Shankar Rai, of the local chapter of World Wide Fund for Nature ( wwf -India). "But very few are recognised in their use and many are on the verge of extinction," he says. It is alleged that many ayurvedic companies and their agents are operating in this region. The companies, which are mostly from the plains, use agents in Siliguri to employ the local forest villagers. "Even the barks of trees are taken out," says Basudev Maji, manager of the Cichonaa Plantation in Darjeeling. "The forest people have become the destroyers of the forests," he says.

"Bhogilal C Shah Institute, an ayurvedic research institute in Bhopal is one the organisations involved," he says. Rai says that many important species of plants have already been lost. Plants such as Taxus Baccata which is used for breast cancer cure, Chirata : Swertia Chirata for malaria, Dhatura Fustuosa for dog bite , Stephania Glabra for blood pressure. It is alleged that companies such as Dabur are making inroads in this area. The grapevine is that Dabur will be buying a huge chunk of land for setting up a unit in Darjeeling district. Smaller companies have already started buying land from farmers to cultivate these plants.

"Every 100 meters in the Darjeeling hills represents a different ecological condition of climate and soil so we have a wealth of biodiversity. But many species have been lost even before we have known their true value," says Rai. This is because very little research has been conducted by the forest authorities on the plants. "Hundreds of plants were lost during the British rule who ordered the clearing of the forests for building the town. The Gorkha land agitation has aggravated problem with the large-scale felling of trees," says Malla.