Into its second year as the exclusive National Environment and Wildlife Film Festival of India, Vatavaran 2003 will screen seventy films on environmental issues 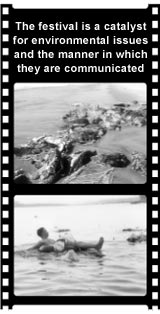 Into its second year as the exclusive National Environment and Wildlife Film Festival of India, Vatavaran 2003 will screen seventy films on environmental issues. "Although there is a plethora of environmental issues, they hardly get a visible face or an audible voice. Media, including films, is one of the best means to communicate. So this festival would be a catalyst for the issues, and their communication,'' says Alka Tomar, festival director.

The films -- from all over the country and differing in duration from two minutes to more than an hour -- have been selected on three parameters: content, technique and how effectively the message is communicated. A 30-member strong Screening and Nomination Committee headed by eminent journalist Bhaskar Ghose chose the films. In the festival itself, a jury headed by film maker Adoor Gopalakrishnan will select the winner of the 'Vatavaran Puraskar', and eight national awards. The films will compete for a total prize money of Rs 6,50,000.

The films have been divided into seven categories: water, natural resources, wildlife, children, tv programmes, public service message and "newcomer". Of the 154 entries received, 10 were from children, of which 7 were selected. "There are films made by street children, after they were trained by Plan International, and the quality matches those of big professionals,'' remarks V V Sundar, communications officer for the festival. One such film, Seeds of Sorrow, shows the ruthless exploitation of young children working for long hours in cotton fields.

As run-up to the festival, the Centre for Media Studies (cms) -- a nodal agency for environmental information the government of India started in 1982 -- has been organising lectures, workshops, and screenings from July itself. During the festival, lectures and panel discussions on water management, the viability of green programmes on Indian television and a special session for children and teachers on the use of theatre for environmental education will be held as parallel programmes.

The festival started last year as Vatavaran 2002, with Sustainable Environment through Media as its theme. The idea was to provide an equal platform for amateur as well as professional film-makers to showase environmental issues. Last year's Golden Tree Award winning film, Many Faces of Madness, portraying environmental degradation as a fallout of globalisation, had been shown at festivals around the world, including the Toronto International Environmental Film Festival, 2001.

cms plans to take Vatavaran 2003 to other cities in India: Ahmedabad, Mumbai, Hyderabad, Bangalore, and Kolkata. Vatavaran 2004 plans to include films from South Asia and Vatavaran 2005 would include a world panaroma.