Veerappa Moily boards Metro train to work to save fuel 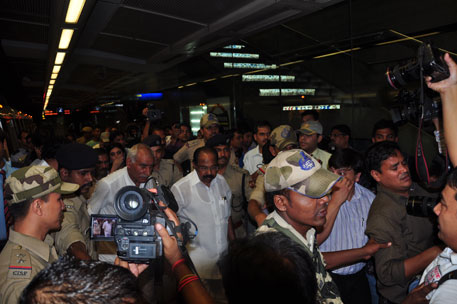 Union petroleum minister Veerappa Moily on Wednesday decided to walk the talk on saving fuel. He walked to the Race Course Metro station, about a kilometre from his house in Lutyens Delhi, and boarded a metro train to reach his office. The government is facing an increasing import bill for crude oil, Moily told the news reporters, who waited outside his official residence from 8:30 am to watch him walking to the Metro station. He said the ministry could save Rs 40,000 on 600 litres of petrol and diesel a day if ministry officials start using public transport every Wednesday.

Moily, dressed in a white Safari suit, emerged from his home at 9.30 am. As media channels rushed to get a byte on his experience of walking to reach the Metro station, Moily took about 15 minutes to reach the station. Security personnel flanked him on both sides. One of the station staff waited near the police check point at the Metro station with cards, one each for Moily and three other officials who accompanied him—his personal secretary, Sanjiv Kumar, officer on special duty Ramakrishna Reddy and additional personal secretary G Robert. A media person trying to capture the minister's entry almost pushed a pregnant woman trying to enter the platform. As Moily entered an already crowded metro passenger car from the platform, a passenger offered him a seat.

A commuter, Jatan Singh, reacting sharply to the sudden rush of people, mostly media and police personnel, said that the minister's move to travel with other commuters might be a noble one, but it was causing discomfort to other people. Another passenger remarked that it was a poll gimmick. However, some passengers in the metro car said that it was a good move and Moily should be supported by other ministries as well.

According to the sources in the petroleum ministry, about 200 personnel from the ministry took public transport to office on Wednesday. Two joint secretaries, Neeraj Mittal and Aramane Giridhar, rode their bicycles to work. On Tuesday, the minister reportedly urged all ministry staff to avoid using personal vehicles on Wednesdays. Earlier, the minister had suggested early closing of petrol pumps to save fuel, which was opposed by several members in the Cabinet. Later, the minister also spoke about free bicycle schemes to help people save fuel. 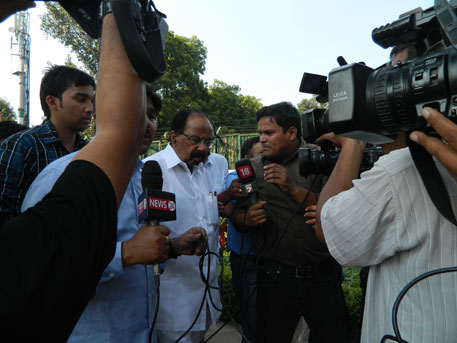 When asked if just by avoiding personal vehicle, fuel could be saved, Moily had this to say. “One day is not going to make any difference. However, this is a process, to begin with,” the minister said.  It took the minister approximately seven minutes to reach Central Secretariat on the crowded Yellow-line Metro train going towards Jehangir Puri, and from there he walked to his office in Shastri Bhavan.

While Moily promised to use the Metro train to reach his office once a week, the Race Course station manager said about 4,000 people living next to the station in the heart of Lutyen's Delhi rely on the Metro line everyday to travel.

During his short Metro train ride, Moily said that a nationwide six week mega campaign worth Rs 52 crores has been launched to save fuel. A circular was issued on Monday evening, asking officers in the ministry of petroleum and natural gas and 14 public sector firms under the ministry such as Oil and Natural Gas Commission and Indian Oil Corporation (IOC) to take public transport every Wednesday.

The minister indicated that the campaign was to save the huge crude oil import bill worth $ 5 billion (Rs 30,897.5 crore) so far in the current financial year. “The crude bill is the biggest item that is impacting current account deficit, when imports exceeds exports. We need to minimise that,” said the minister. In 2012, India spent about $144.29 billion on oil imports.

Delhi non-profit Centre for Science and Environment has welcomed Moily's gesture, and expressed hope that he is serious about it enough to take public transport regularly.