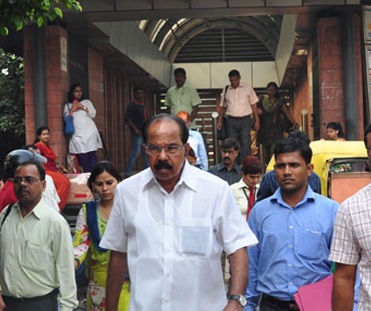 Verappa Moily, who was recently given the additional charge of Union Ministry of Environment and Forest (MoEF), after Jayanthi Natarajan’s resignation, has decided to review the report on Eco-Sensitive Area (ESA) in the Western Ghats. The move hints at an indefinite delay in the declaration of parts of the Ghats as ESA, which was recommended by the Kasturirangan report earlier this year.

Our souces in the ministry have confirmed that Moily, the Petroleum and Natural Gas minister who took additional charge of the environment ministry, recently met the chief ministers of Congress-led Maharashtra and Kerala on December 23 to discuss the implications of the report's recommendations on the states. He is now reportedly planning to write to the chief ministers of six states that comprise the Western Ghats region to seek their views on the recommendations of the report.

The Western Ghats, which extend from Gujarat to Tamil Nadu covering an area of over 164,000 sq km have been identified as one of the world’s eight richest biodiversity hot spots. The mountain range had also received the UNESCO World Heritage Site tag last year.

The suggestions made by Kasturirangan report

A high-level working group of the environment ministry, headed by Planning Commission member K Kasturirangan, was formed by the ministry in August 2012 to suggest measures to protect the ecological sanctity of the Ghats. In April this year, the panel had recommended that 37 per cent area of the Western Ghats, which represents a band of contiguous vegetation and is extremely rich in biodiversity, should be declared as eco-sensitive. It also suggested that no new projects or expansion of projects related to mining, quarrying, thermal power plants and highly polluting industries should be allowed in the ESA.

In October, the ministry, after taking into consideration the suggestions and objections by various stakeholders including the state governments, agreed “in principle” to the recommendations of the panel. On November 13, it issued directions to the states under the Environment Protection Act, 1986 prohibiting new projects and expansion of various projects including construction projects in 20,000 square metre and above and other red-category (most polluting) industries in the ESA identified by the Kasturirangan Panel. The ministry is, however, yet to notify the boundaries of the ESA.

The ministry's decision to accept the Kasturirangan report was met with widespread protests in the states where people feared that their rights and livelihood will be affected by the ESA notification. The ministry, however, had clarified through an order dated December 20, just a day before Jayanthi Natarajan resigned, that the ESA notification will not affect the land ownership rights of the people and will allow unaffected continuation of non-industrial practices like agriculture, horticulture and plantation. It also reiterated that the prohibition was imposed only on the new industrial and mining projects and on the expansion of projects; the existing projects would not be affected. It also said that the boundaries of the ESA will be finalised and fine tuned after taking into account the suggestions and objections on the draft ESA notification made by stakeholders, including the states.

But while the ministry was in the process of finalising the draft notification, Jayanthi Natarajan quit. According to some media reports, speculations are rife that she was asked to resign by the Prime Minister's Office after being held responsible for hindrances in clearance of several development projects. Natarajan, however, maintained that she quit on her will to work for the party for upcoming Lok Sabha elections.

Moily's decision to once again consult the states on the Kasturirangan report before issuing the draft ESA notification is being seen as a delaying tactic considering the 2014 elections round the corner.

Since the ministry has already issued the directions to prohibit new industrial and mining projects in the proposed ESA, 'revisiting' the report may not have immediate implications on ground. However, with just three months to go for the elections, it seems unlikely that the consultation process, initiated by the newly appointed environment minister, will reach any conclusion. The draft ESA notification may not be able to see light of the day, at least during his current tenure.