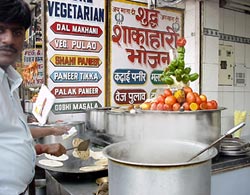 think your heart is safe if you are a vegetarian, young at heart and have a hole in your pocket? No, say researchers from New Delhi-based All India Institute of Medical Sciences. They have discovered that irrespective of socio-economic background and age, vegetarians are falling prey to heart ailments as a result of vitamin b12 and folic acid deficiency. The researchers found that most vegetarians have high levels of homocysteine (hcy), an amino acid identified as a risk factor for heart diseases.

During their study, the researchers examined 46 people from slum areas and 26 from other localities. Their analysis indicated that 84 per cent residents of both slum areas and other localities had high hcy levels. The elevated levels were attributed to the deficiency of folic acid and vitamin b12-- at least 81 per cent study subjects had low vitamin b12 intake and 95 per cent consumed less of folic acid. Such deficient intake was much more pronounced among vegetarians than non-vegetarians.

They attribute the problem to the choice of food and medium of cooking. "The high levels of hcy are due to oil rich diet, which is eaten by most Indians. Being a vegetarian is not good if only oil rich food is consumed," says Anoop Misra, lead author of the study. According to him, it is very alarming that high hcy levels were found among slum dwellers, who are usually not prone to heart diseases because of their lifestyle. Even more worrisome is the fact that most of the subjects were very young -- their average age was 24 years. Moreover, even the supposedly 'educated subjects', namely students, were found to have low intake of the vitamin and folic acid.

The researchers assert that the elevated levels of hcy may add to the already existing heart diseases' risk factors like smoking, high cholesterol level, obesity, diabetes and excessive lipoprotein a (lpa). "Coexistence of high levels of lpa and hcy increases the risk of suffering from coronary heart disease (chd) by nine-folds," Misra said. High levels of hcy have also been linked to early onset of heart diseases in other parts of the world. A study conducted in the uk has also projected high hcy as a risk factor for chd among Asian Indians. Excessive amounts of the amino acid can also lead to alzheimers disease and dementia.

The researchers assert that the problem can be overcome by creating awareness. "Folic acid rich in vitamin b should be added to food items in a cost-effective manner," says N K Ganguly, director-general of New Delhi-based Indian Council of Medical Research.