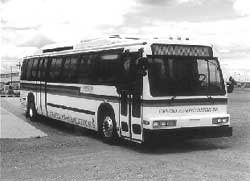 the famous red double-decker buses will soon be joined by zero emission fuel cell-powered buses on London roads. In a major move to curb air pollution, the European Commission (ec) has allocated us $16.65 million for the launch of these green vehicles.

This funding -- one of the largest amounts the ec has ever given -- is a part of its Clean Urban Transport for Europe demonstration project. London is one of the nine European cities where fuel cell-powered buses will be introduced into the public transport system. The vehicles will also operate in Amsterdam, Barcelona, Hamburg, Luxembourg, Madrid, Porto, Stockholm and Stuttgart.

The ec commitment is in line with the new white paper on transport policy. The commission says that the promotion of alternative fuels for transport is a key objective to reduce congestion and its detrimental effects, in particular in urban areas.

The fuel cell bus project is believed to be the first volume production test of this scale conducted anywhere in the world. They will be produced by EvoBus GmbH, and will be delivered to the cities during the year 2003. "Hydrogen is an efficient and environmentally friendly power source for the future, which the commission is committed to promote as part of its action plan to foster the use of alternative fuels in transport," the European Commission said in a statement recently.

This project will also help European countries get operational experience in alternative fuels. Each of the bus operators will build a filling station for gaseous hydrogen. Fuel producers are partners in the creation of the hydrogen infrastructure, some of who will subsequently operate the filling stations to familiarise themselves with alternative fuels. Hydrogen fuel will be obtained from fuels such as natural gas, methanol or petroleum, and oxygen from the air.

In India, the fuel cell bus development programme has not gained much momentum. According to an official of the Global Environment Facility (gef) -- the agency that will provide financial assistance to the project -- no significant change has taken place. "The proposal is awaiting approval from the Union ministry of non-conventional energy sources (mnes)," says the official. And it is not likely to be cleared in the next six months.

The project is being executed by the mnes and the Delhi Transport Corporation. The prototypes, similar to the ones used in Vancouver and Chicago, would be provided by the Canada-based Ballard Power, for a price of us $1.2 million. The gef grant will be used for the demonstration of eight fuel cell buses in New Delhi.