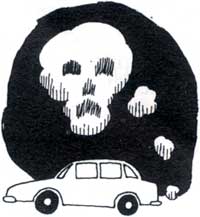 Nissan Motor Co, Japan, seems in for rattling-bad times. A study by Japan's transport ministry has found that more people have died from carbon monoxide poisoning in Nissan cars since 1985 than in other Japanese makers' vehicles. Nissan has responded by offering free safety checks on its Skyline, Laurel and Leopard models, which admittedly have carbon monoxide emission problems.

The 3 models were cited in 7 of the 21 incidents of carbon monoxide poisoning in which 23 people died, reveals the survey. The deaths were attributed to holes or corrosion in gas exhaust pipes or car bodies, which allowed the noxious gas to seep into the air breathed by passengers.