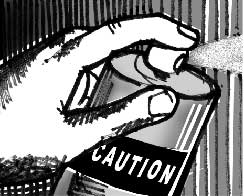 a report calling for widespread testing of chemicals to assess their health and environmental impact has been recently endorsed by the European Parliament. This move is being seen as a major step towards overhauling the outdated chemical policy of the European Union (eu). The report was approved by 242 votes in favour, 165 against and 35 abstentions.

The new legislation includes notification of new substances and systematic evaluation of the existing ones. A harmonised system for classification, packaging and labelling of dangerous substances has also been set up. The main objective of the legislation is to ensure a high level of protection for human health and the environment.

Along with this, it aims to assure the efficient functioning of eu's internal market and stimulate innovation and competitiveness in the chemical industry. Moreover, in a reversal of the 'burden of proof', industry has been made responsible for providing information about the hazards posed by their products, risk assessment and risk management. "Protection of human health and environment must have a priority," said Inger Schoerling, the Swedish Green parliamentarian who wrote the report. "We are asking for a strong improvement in the quality and the availability of data. In the future there will be a situation where no marketing will be possible without data," she added.

The earlier legislation had failed to identify and prevent dangerous chemicals from being released into the environment. The report recognises that the main sources of release of hazardous chemicals has shifted from point sources such as industrial chimneys to diffuse sources such as consumer prod ucts, rendering traditional end-of-pipe controls ineffective. For example, according to the European Consumers Association (beuc), an average hair spray contains 15 chemical substances, many of which have a potentially harmful effect on health and the environment.

The European Parliament has called for testing and registration of the 30,000 substances whose annual production exceeds one tonne, but it has not demanded similar strict requirements for chemicals produced in smaller quantities. "The report has been scaled back in respect of those chemicals," says David Bowe, a British socialist parliamentarian. According to the European Chemicals Bureau, for the 2,700 high production volume chemicals manufactured in Europe, complete data is available only for 14 per cent and none for 21 per cent. Such a state has made many organisations across Europe criticise the one tonne cut-off limit.

However, overall, the policy is being considered as a step in the right direction. "This is one of the most progressive chemical policies ever made as it is targeted at the harmful substances in products and not just release from the industries. Another of its positive aspect is creation of data. But there are a few shortcomings, the main one being lack of a preventive approach. The policy's main focus is risk management," said Ravi Agarwal of the Basel Action Network and chief coordinator of Srishti, a Delhi-based non-governmental organisation.

The new standards are also applicable for substances imported from countries outside the eu. "The policy will definitely have quite a major impact on Indian exports to the European countries. They are now looking at products and the onus of proving that your product is safe lies on you. If India's imported products fall short of standards they will be banned," asserted Agarwal.

According to an European Parliament report, world production of chemicals has shot up to 400 million tonnes from near one million in 1930, but it has not been followed by adequate screening for toxicity. As of today, there are over 100,000 registered chemicals manufactured in Europe and these are often part of products used everyday. But till now only 140 of these have been put on the priority list for testing and introducing risk reduction measures. Likewise, only 11 out of these 140 have been assessed for risks and no risk reduction measures have been adopted till now for any of them.

Data from European Chemical Industry Council (cefic) shows that Western Europe accounts for nearly one third of the world's chemical production, way ahead of the us and Asia. In 2000, the industry recorded a turnover of us $430.7 billion. Around 1.7 million people are employed in the 34,000 odd eu chemical firms. There is a concern among many that the new legislation could lead to job losses in Europe's large chemical industry. On these grounds, the European chemical industry has been opposing such a legislation for quite some time now, saying that it would be too cumbersome and costly and would seriously damage the business of smaller firms. They say that such widespread testing would be almost impossible to implement.

"The chemical industry is convinced that an over regulated 'command and control' approach, while ignoring the values of sustainable development, would give the wrong signals to the business community and make Europe less attractive for new investments," stated a release from cefic. Despite these views, most of the environmentalists feel that the policy would certainly prove to be beneficial.