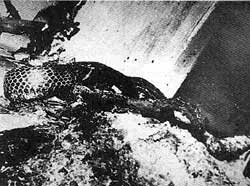 IT WAS a strange case of politicians taking out their venom on snakes. Angry CPM workers in Kerala vandalised and set fire to the Parassinikkadavu Snake Park in Kannur. The reason for the wanton destruction of what was one of the finest snake sanctuaries in Asia, was the defeat of the CPM nominees in a recent election to the governing body of the A K G Memorial Cooperative Hospital. The election was won by candidates of the breakaway CPM wing, headed by M V Raghavan, who is also president of a charitable society that manages the snake park.

The two hours of vandalism took a high toll -- rare species of reptiles, including 12 cobras, two king cobras and monitor lizards; migratory birds, such as painted and grey storks, and peacocks, vultures, eagles, several mynah species and rabbits were burnt to death. Some snakes that escaped the flames were stoned to death by CPM workers.

A high-level committee has been formed under Chief Minister K Karunakaran to revive the park and calculate the loss, which obviously cannot be measured in mere monetary terms.