A new drug will reduce the agony and the costs of treating thalassaemia, a hereditary blood disorder 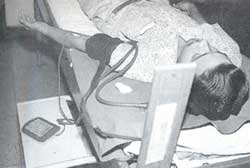 A NEW drug to treat thalassaemia -- a genetically transmitted children's blood disorder that causes the rapid destruction of red blood cells leading to anaemia -- is set to hit the Indian market. Developed by George J Kontoghiorghes at the haematology department of the Royal Free Hospital School of Medicine in London, the drug, named deferiprone, will cut the cost of treating thalassaemia to about a quarter. Even more significantly, deferiprone will be administered orally, replacing drugs that are agonisingly injected into patients in a procedure that takes 8-10 hours a day. The disease is inevitably fatal unless diagnosed and treated early.

The annual cost of treating a thalassaemic child can be as high as Rs 1.5 lakh. In India, over 95 per cent of thalassaemics cannot afford this expense and eventually die. The daily cost of injectible drugs wavers between Rs 200 and Rs 300; deferiprone, says CIPLA, an Indian pharmaceutical, can bring it down to Rs 50. CIPLA is still waiting for clearance from the Drug Controller of India to market the drug.

An estimated 240 million people in the world (28 million in India) carry the gene that causes thalassaemia. About 8,000 thalassaemic infants are born in India each year.

Typically, the disease is detected in the second 6 months of life, when the infant starts paling. It is usually accompanied by an enlargement of the liver and the spleen -- an abdominal organ involved keeping blood fighting fit.

Thalassaemia calls for lifelong treatment. Patients are given regular blood transfusions to maintain the level of haemoglobin in the blood, and special drugs called iron chelators. Unfortunately, transfusions result in an accumulation of excessive iron in the body, which has toxic side-effects involving the heart, liver and thyroid gland.

It therefore becomes essential to remove the excess iron for which iron chelators are used. The drugs bind the excess iron, which is then excreted. The iron chelators commonly used are injected subdermally by a special portable battery-operated pump. The prolonged use of these drugs can affect vision and hearing.

But deferiprone, according to several studies on humans and animals, is free from such side-effects and is effective both in the short-term and in trials lasting 4 years. Following initial clinical trials in the UK in 1986-87, the study was extended to 26 centres spread over 14 countries. Over 400 patients aged between 2 and 82 years were given the drug over variable periods. The results so far have been fairly encouraging.

The largest trials on thalassaemic patients have been conducted in India, with financial support from CIPLA. After encouraging results from the first phase of clinical trials, involving several Bombay institutes, the trials were extended to include more patients from Delhi, Calcutta and Chandigarh.

Patients on the drug showed a reversal of the symptoms of iron accumulation in the body, and their urine turned deep red in colour, indicating an excretion of iron. The iron concentration in the blood began dropping within 3 to 6 months of treatment, and by 14 to 20 months it had dropped to almost half.

The researchers, led by M B Agarwal, a haemotologist at Bombay Hospital Institute of Medical Sciences, found that the new drug was as effective as conventional therapy. Agarwal says that even pooled data obtained from global trials proves that deferiprone is as effective.

The drug is not free of contraindications, however: joint pains and a reduction in the number of white blood cells. But both Agarwal and Konotoghiorghes say that the side-effects are minimal compared to the advantages.