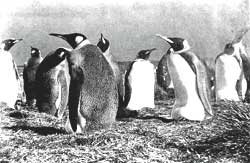 young emperor penguin chicks have been observed moving further away from their home in Antarctica to warmer waters of north. And therein lies the danger, for these waters are not bound by international treaties. The Antarctic Treaty primarily covers the Ross Sea, a frigid body of water where the penguins reside. Human interference is minimal in this region.

Gerald Kooyman, a biologist with the Scripps Institution of Oceanography, California, us , wondering where young chicks went in their early years (penguin chicks about six months old usually leave their parents for up to five years) discovered that they actually swam into balmier waters. In fact, one penguin, tracked with a transmitter attached to it, had travelled 2,800 km away from the Ross Sea.

Observed Polly Penhale, a marine biologist with the National Science Foundation's programme on polar biology, "You can write many regulations, but animals are not reading them and changing their migration patterns accordingly." Kooyan now wants to track more penguins with better transmitters but fears that as global fishing expeditions expand, the emperor penguins' existence could be threatened.