Vertigo at the summit 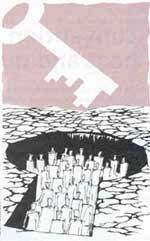 "ATTACKING Poverty, Building Solidarity, Creating Jobs" --these are the 3 central themes on which the United Nations-sponsored World Summit For Social Development, to be held from March 6-12 in Copenhagen, Denmark, rests. Various international communities are patching together a last-minute-bid to define their stands on these issues. For, despite the glowing tributes paid to it by its organisers -- Ambassador Juan O Somavia of Chile, chairperson of the Preparatory Committee of the Summit claimed, "For the first time in the history of the un or the League of Nations, heads of state and government will meet in order to deal with social development as a priority issue of the international agenda."

The run-up to this significant global event has been remarkably low-key. "The Summit is supposedly of singular importance, but going by what transpired in the 3 Preparatory Committee (PrepCom) meetings, it is doubtful if any action is going to be taken beyond just talk," scoffs S D Kulkarni, of the Council for Social Development, New Delhi.

While the developing countries are gearing up to ask for more aid to promote "social development", the industrialised nations are determined to sit on the till. The result of this recalcitrance has been the formulation of a rather loosely-structured Draft Declaration and a Draft Programme of Action.

"The declaration at present consists of 9 commitments which collectively aim at launching aglobal drive for social progress. They are all 'committed' to lofty principles but not to targets. No timeframe has been set, so none of the parties can be held accountable for the commitments they make," says India's Rajesh Tandon, director, Preparatory Research in Asia, an organisation instrumental in mobilising ngos to form a strong opinion base on the Summit.

However, there is still enough to look forward to. The issue in focus is, of course, the eradication of "absolute poverty". The United Nations Environment Programme (unep) is making an earnest attempt to bring to the notice of the international community the essential link between environmental degradation and poverty.

"The poor are forced to exploit the environment due to limited choices of food and fuel. At the other end of the spectrum, industries from rich nations exploit the resources of the poorer nations, rendering them victims," declares unep. The Social Sunmmit should be used as a forum to drive home the message that overexploitation of natural resources can only lead to environmental disaster; sustainable development is the only viable answer today. "And human beings are at the centre of the concern for sustainable development. People living in poverty must be given power in the decisionmaking process," emphasises its executive director, Elizabeth Dowdeswell.

Says Kulkarni, "As for the developing nations like India -- they can at least hope that the Summit will refocus the attention of the world community on poverty and help establish a strong followup mechanism at the international level."