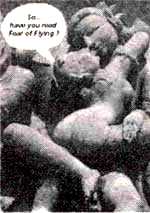 The famed Khajuraho temples in Madhya Pradesh could possibly suffer structural damage due to vibrations caused by aircraft movements in the vicinity. The Archaeological Survey of India (ASI) appointed a research group in the first week of December, to study the development of cracks in some of the sculptures, ascribed by local authorities to recurrent sound and shock waves created by aircraft flying low to and from the nearby Aurangabad airport.

Among other measures, this group will install highly sophisticated monitoring equipment in and around the temples to measure the shock and sound waves created by the flights.