Medical researchers have used some smart molecular jugglery to target cells that lack the p53 molecule or cancer cells, to fight the scourge 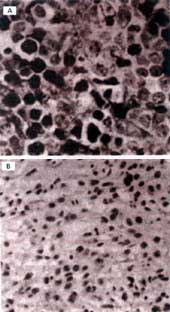 FRANK McCormick and his team from Onyx Pharmaceuticals, a California-based biotech firm, have thought of a crafty way to beat cancer. Mc- Cormick's logic is that if law-abiding cells could go astray under the influence of cancer, the destructive talents of a mutant virus that is a cell destroyer could be used effectively against the invading cancer. His group, has just succeeded in using a modified virus to treat cancers that have otherwise not responded to conventional treatment like chemotherapy. These scientists have shown that when an adenovirus that has a key enzyme deleted, is introduced into a cancer-stricken body, it can no longer reproduce itself in normal cells. Instead, it goes after the cancer cells, which lack the p53 tumour-suppresser gene. As a result, the mutant form of the virus kills cancer cells, apparently without harming normal cells (Science, Vol 274, No 5286).

The deoxyribo nucleic acid (DNA) in all human cells undergoes more than 5,000 mutations due to factors like heat, chemicals and radiation, everyday. Under such a sustained assault, cells could turn cancerous. Among the internal defence mechanisms working against the assault are the 'guardian genes' or tumour-suppresser genes, prominent among which is the protein molecule p53. That over 500 laboratories are involved in the study of p53 shows that it is the hottest molecule in town. It was declared the 'molecule of the year' by the editors of Science a few years ago.

The enthusiasm about p53 is understandable as recent studies have shown that mutated p53 frequently makes its appearance in cancer cells. A normal p53 gene induces cellular repair if any damage is detected in the DNA. If attempts at repair fail, the p53 induces the cell to commit hara-kiri by triggering apoptosis, or programmed cell death. But a cell with a mutant p53 gene multiplies three to five times faster than a normal cell and becomes cancerous.

In 1977, it was discovered that the EIB protein of adenovirus is essential for viral reproduction as it codes for a molecule that binds to the p53. But the fact that operational p53 prevents cells from duplicating with foreign DNA, from say viruses, was known to scientists only in the '90s. Or vice versa, if a cell has to replicate the foreign DNA, the virus has to shackle the p53 protein. And the ElB protein does just that.

As the roles of EIB protein and p53 in cancer became more clear, McCormick wondered how the adenovirus reacted in cells lacking functional p53, the known EIB target. Since the adenovirus must turn off p53 in order to replicate, McCormick realised that any virus that could not disable p53 would be unable to grow in healthy cells but could wreck havoc in cells lacking p53, or cancer cells. What is significant about McCormick's work is that it exploits the mutant virus' ability to target cells with ineffective p53. And this effectively means that over 50 per cent of known human cancers could theoretically benefit from this therapeutic regimen.

After a persistant search for a viral strain that either lacked EIB or had another region for viral replication, or both, the team hit upon the mutant strain dl 1520, from among a bunch of human group c adenoviruses. Mc- Cormick's group tested the virus' ability to grow in normal skin cells and about 20 different kinds of tumour cells lacking p53. It checked the growth of human turmours artificially transplanted into mice. When the virus was directly injected into the tumours, three out of five of them disappeared altogether and did not reappear even after three months of following up on them. The next step, clinical trials in human cancer patients, are underway at the University of Texas Health Centre in San Antonio and the University of Glasgow in Scotland. The results are expected by early 1997.

However, few issues need to be sorted out before this technique could be considered for wider application. There lurks a doubt about the virus' ability to discriminate between normal and cancerous cells. And even if the virus works effectively, another critical issue is the method by which to send the virus to relatively inaccessible sites and the response of the patients' immune systems to it.

Yet, there is excitement among medical researchers about the possibility of including this new weapon in their fight against the scourge. Says Richard Klausner, director of the National Cancer Institute at Bethesda, Maryland: "What I like is how clever it is. It has been a long-held fantasy to find an anti-cancer virus."