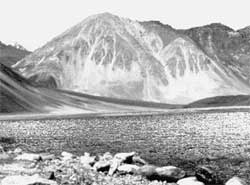 jorge Sarmiento and Corinne Le Quere of Princeton University in New Jersey, us, have observed that warmer oceans are more stratified and cause the ocean circulation system to slow down. As a result, they absorb much less carbon dioxide (co2) -- 50 per cent of that absorbed before, in some cases (New Scientist, Vol 152, No 2058).

Each year, oceans are known to dissolve up to two billion tonnes (t) of co2 from the atmosphere. By doing so they help dampen down the greenhouse effect caused by six billion t of carbon that enter the atmosphere from fossil fuels. Scientists have long wondered whether rising global temperatures would affect this disposal system. Climate models such as those used by the Intergovernmental Panel on Climate Change till date have assumed that the ocean's capacity to remove co2 from the atmosphere will stay constant as the world warms. But Sarmiento's model suggests that conditions would be radically different over the next 350 years.

Global warming is happening much faster than climate researchers predict. The oceans usually bury co2 by removing it from the surface layers of water. One way of doing this is through convection currents, the biggest of which is the 'conveyer belt' that begins in North Atlantic. As ice forms here, saltier, denser water is left behind. This denser water sinks to the ocean floor, setting up a current that begins a journey around the world. When it returns to the North Atlantic, it contains less co2. If waters in North Atlantic warm up and the current slows or carries less water, it will remove less co2. The Princeton model predicts that over 350 years, the amount of co 2 absorbed by oceans would be 49 per cent less than assumed. As a result of this positive feedback effect, global warming would increase.

However, Sarmiento warns, much of the co2 in the oceans is taken to the ocean floor not by ocean currents, but by marine organisms. Once dissolved in surface waters, co 2 is absorbed by planktons and other marine organims. Most of the carbon eventually falls to the ocean floor. The strength of this sink of carbon depends on how much life the ocean is producing. But since the biological productivity of these organisms depends on global warming, greater the warming, lesser will be the productivity. Cooler waters tend to produce more life, and if there is reduced productivity, the co2 absorbed will be less.