The High Court in London confirmed that the British Geological Survey has a reasonable case to answer and that the victims have a realistic prospect of success in their pursuit of claims. The court decided that the litigation raised a novel point in law and could not be summarily dismissed at a preliminary hearing. The verdict paves the way for the victims to file a case for compensation 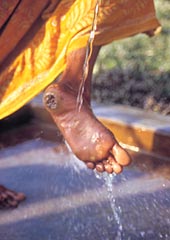 Victims of arsenic poisoning in Bangladesh have won their first victory. The High Court in London confirmed that the British Geological Survey (bgs) has a reasonable case to answer and that the victims have a realistic prospect of success in their pursuit of claims. The court decided that the litigation raised a novel point in law and could not be summarily dismissed at a preliminary hearing. The verdict paves the way for the victims to file a case for compensation.

The judgement is a novel legal action concerning a developing country and is likely to set a precedent. "The ruling defines a responsibility in principle for the consequences of work, including research, funded under bilateral aid programmes," points out Peter Ravenscroft, principal hydrogeologist, Arcadis Geraghty and Miller International Inc, a uk-based business organisation.

"The judgement would mean that many other aid agencies can now be held responsible for their actions in developing countries," opines Dipankar Chakraborti, director, School of Environmental Studies, Jadavpur University, Kolkata. Experts feel that this decision should be used to change the mode of operation of aid agencies and to include review by a third party. The verdict should ensure that consultants working in developing countries apply the same standards as they would in industrialised nations.

It may be recalled that bgs had provided expertise in a well-digging project executed in Bangladesh from 1983 to 1992. The plaintiffs contended that bgs did not test for arsenic in the water of wells. As a result, they unknowingly consumed water contaminated by arsenic over a long period (see: Hoping for relief, April 30, 2003). Meanwhile, London-based law firms Leigh, Day and Company and Alexander Harries -- which represent 750 victims -- are in the process of preparing documents. They hope to file group litigation within a month. "The case has a good prospect in court," says Bozena Michalowska of Leigh, Day and Company.

On its part, the Natural Environment Research Council (nerc), the parent body of the bgs, feels that the judgement does not reflect on the merits of the claim. "We are confident that there is no case to answer. The claim will fail if it goes to trial," it stated in a press release. nerc intends to apply to the Court of Appeal against the decision.

The final case would have to specify the amount of money claimed. This is likely to depend on the individual degree of illness. For instance, a claimant suffering from skin cancer as a result of consuming arsenic-contaminated water after 1992 can expect to receive up to us $48,500 in compensation. With the case going into full trial, dossiers are likely to be prepared for more victims.

Though it has not been decided how the money is going to be utilised, it might be distributed to the victims through a trust and used to provide treatment facilities. "The choice of the mode will revolve around how much is won," says Syeda Rizwana Hasan, director, Bangladesh Environmental Lawyers Association, a non-governmental organisation. "With this win, we would like the government to take a position regarding the victims," says Sharmeen Murshid, chief executive officer, Brotee, a Bangladesh-based non-profit body.