Victory is certain, yet the struggle continues

A number of crucial manoeuvres have to be executed flawlessly for MOM to not only enter Martian orbit, but also be productive in its scientific objectives 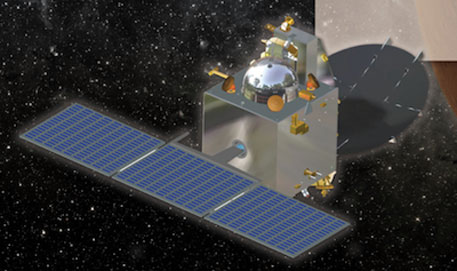 With the announcement by ISRO that the “the 440 newton liquid apogee motor (LAM) of India's Mars Orbiter Spacecraft, last fired on December 01, 2013, was successfully fired for a duration of 3.968 seconds at 1430 hrs IST on Tuesday (September 22),” orbital insertion of MOM is all but certain. Yet few crucial manoeuvres remain to be executed flawlessly for MOM to not only enter Martian orbit, which is the prime objective of the mission, but also be productive in its scientific objectives.

Currently, the spacecraft is propelling at a breakneck speed of about 22 km per second (80,000 kmph) on an orbit around the Sun in a path that intersects the orbit of Mars. On September 24, about 7.17 am IST, both the MOM spacecraft and the Mars will arrive at this intersection. Precisely when the spacecraft is at the right altitude from surface of the Mars, the engines should start and the firing should take place, failing which the mission is lost. Timing is critical.

But before the engine can be fired, the MOM has to do a somersault in space. Currently the LAM's nozzle is pointing away from the direction of the motion. If the engines are fired in this orientation, the spacecraft will gain velocity, however, the purpose is to decrease it. Hence exactly at 6:56 IST the spacecraft will commence its attitude correction to make the nozzle points against the direction of the motion. This tricky manoeuvre which will be achieved by firing the small thruster and using the wheels in the MOM will take about 21 minutes.

Secondly, when the spacecraft is at an altitude of about 1,847 km from the surface of the Mars the LAM and eight thrusters have to fire in unison. From a velocity of 5.127 km per second relative to Mars, the velocity has to be reduced to 4.316 km per second. Only then the spacecraft will be captured by the gravity of Mars, resulting in a closed elliptical path. For this, ISRO has estimated that the burn duration has to be around 1,454 seconds (about 24 minutes). However, the fuel flow or actual burn rate may vary and, hence, the accelerometers in the spacecraft will monitor the acceleration achieved every 520 milliseconds and once the acceleration achieved is 1,098.7 metre per second, the engines will be shut down.

Even if the spacecraft was not in radio shadow, given that the distance of the MOM will be around 200 million km, ISRO engineers will not be able to command the spacecraft as you control remote car. The two way time delay will be about 24 minutes. Hence, taking into consideration various contingencies, commands have been loaded into the spacecraft and all manoeuvres will have to take place automatically.

After the burn is complete, once again spacecraft should roll-over to the position wherein the nozzle once again points against the direction of the motion. However, this reverse maneuver will take only 10 minutes.

Once the pivotal firing takes place at about 7.17 am, ISRO will rely on the data from the first four minutes of the burn to compute the path and to estimate the Mars Orbit Insertion. It will be 7:47, approximately six minutes after the burn is completed, that the spacecraft will again come on line of sight and the telemetry could resume. The reorientation of the spacecraft will be completed only by 7:52 am. The data on all parameters will be gathered, analyzed and it is expected that by 8:30 am, the fate of the mission will become clear.

No wonder the engineers at MOX are stretched in anticipation; hours to come are decisive. The ISRO engineers and scientists are quite optimistic; after all, the mission has been unmarred until now. What’s more the test firing on September 22 not only woke up the slumbering engines but also helped in mid-course correction. Before the correction, the trajectory of the spacecraft would have taken it to 720 km from Mars, but the test firing imparted some correction to the trajectory, enough to bring the trajectory approximately to 500 km. This would imply that ISRO may be able to achieve the desired orbit resulting in the spacecraft’s lifespan becoming longer.

Once the spacecraft is injected into the Martian orbit, the spacecraft will go around the Red Planet in an elliptical orbit whose Periapsis (nearest point) will be just 423 km but the Apoapsis is about 80,000 km. In this orbit the MOM will take 76.8 hours to make one revolution around Mars and is expected to go around it for six months.

MOM was launched using ISRO’s workhorse rocket, the Polar Satellite Launch Vehicle (PSLV), designed for putting satellites into low Earth orbit. Therefore, unlike MAVEN, which was launched by NASA directly towards Mars, Indian MOM had to take help from Earth's gravity through a novel  space manoeuvre called 'gravity assist' to free itself from the clutches of Earth's gravity. MOM went around Earth seven times before it was hurled at Mars.  This implied the route to Mars was circuitous and long.

As PSLV was less powerful it could launch only a 1.3 tonne spacecraft. The bulk of the spacecraft load is fuel, and hence the actual payload, that is the scientific instruments that could be accommodated, was just 15 kg.  ISRO used miniaturized components and composite materials to pack the limited payload with five instruments that included a colour camera to obtain high resolution pictures, instrument to detect presence of methane in upper atmosphere and an instrument to measure ratio of deuterium to hydrogen. Indeed the scientific goals of MOM are modest compared to MAVEN (Mars Atmosphere and Volatile Evolution), which has eight instruments and would be the first spacecraft to examine questions such as how the solar wind has stripped away the Martian atmosphere.

On the other hand, for this mission, science is only an aside. ISRO's maiden mission to Mars is essentially technology demonstration mission; it is the capacity of ISRO being able to innovatively launch a spacecraft towards Mars and then manoeuvre it into Martian orbit, overcoming hurdles en-route, brave adverse space weather and radiation hazards, maintain reliable communication in deep space are the primary objective of this mission. Yet, inspired by the India's first moon mission Chandrayan-1 and its success in detecting “water” on moon, NASA has come forward for collaboration and it is expected that data from MOM and MAVEN will be shared and both the spacecraft would be jointly deployed to study, Siding Spring, a comet that will have accidental close encounter with Mars on October 19.