Price support, not loans, can save Vidarbha farmers 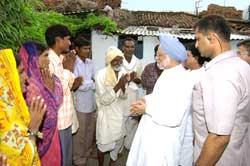 on july 1, 2006, prime minister Manmohan Singh announced Rs 3,750-crore as relief for cotton farmers of six districts of Maharashtra's Vidarbha region. Around 800 farmers have committed suicide since June 2005. Though the rehabilitation package seems sizeable, it does not take into account the financial realities of the crisis.

The package is for Akola, Buldhana, Amravati, Wardha, Washim and Yavatmal districts. It offers waiver of interest worth Rs 712 crore on total bank loans and extension of the period for repayment by three to five years for loans of Rs 1,296 crore.

Singh also proposed measures like horticulture and fishery to diversify farmers' income. He also granted Rs 2,177 crore for 523 irrigation projects that are on hold due to financial and management constraints. Vidarbha has poor irrigation facilities -- 11 per cent of cultivated area is covered compared to 99 per cent in Punjab. Along with this, water charges in Maharashtra are the highest in the country.

Farmer leaders say the package won't stop suicides. "The Maharashtra government has already had a Rs 1,075- crore package to reschedule loans and waive interests for these districts since December 2005, but that has not checked suicides," says Vijay Jawandhia of Shetkari Sangathana, a farmers' front.

"The package isn't of much help to farmers since there is no monetary aid," says Kishore Tiwari of the ngo Vidarbha Jan Andolon Samiti of Yavatmal district. The package only offers Rs 50 lakh to each of the districts for immediate rehabilitation of the family of a farmer who might commit suicide. "The government seems to have acknowledged that suicides are inevitable," says Tiwari. An estimate says that the Rs 3 crore grant is less than half the money spent on Singh's visit to the state.

Singh has offered additional credit of Rs 1,275 crore to be disbursed by banks to bring immediate relief to farmers. But local leaders say fresh loans will only ensure that farmers continue to stay in a debt trap because the loan will be used to repay moneylenders.

In Vidarbha, unlike in other regions of Maharashtra, farmers do not have easy access to cooperative and bank loans. Institutional loans disbursed to farmers in Vidarbha are as low as 8 per cent of the total compared to 80 per cent in western Maharashtra (see 'Long yarn', Down To Earth, March 31, 2006). "Besides, farmers of this region do not have easy access to banks, so they end up borrowing from moneylenders, who charge exorbitant interest rates," says journalist Ranjit Deshmukh. "The interest rates are as high as 150 per cent per annum. Thus, most farmers take bank loans to pay back the moneylender and get even deeper into debt," says Ramdas Ade, a farmer of Salod Krushnapur village in Yavatmal district.

While looking for new bank loans farmers prefer two-wheeler loans because the interest rate on them is low. "When the Maharashtra government announced interest waiver and debt-rescheduling in December, it led to an increase in the sale of two-wheelers with one village in Yavatmal alone buying 42 Hero Hondas," says Deshmukh. Automobile companies seized this opportunity and offered bikes at village loan melas. Mahavir Kalpurushkar, a marketing executive of a two-wheeler company, claims that in Yavatmal alone the sales have gone up exponentially. The bikes land up with moneylenders.

Jawandhia feels that farmers will get relief if they are offered a price for their produce that will help recover their cost of production, not more loans. At present, data shows that the cost of cultivating cotton in Maharashtra is Rs 73 per kg if the farmer uses non-Bt seeds and Rs 22 per kg for Bt-cotton. But the government procurement agency has lowered the minimum support price from Rs 22-25 to Rs 17-18 per kg. With Vidarbha's productivity being as low as 271 kg per hectare, the lowest in the country, the farmers need more price support. The lack of support played a major role in the spurt in suicide cases.

No wonder three more farmers committed suicide on the day of Singh's announcement and eight more over the next three days. There appears no real relief in sight for Vidarbha's farmers.