Vietnam proposes legalising use of tiger parts in traditional medicines 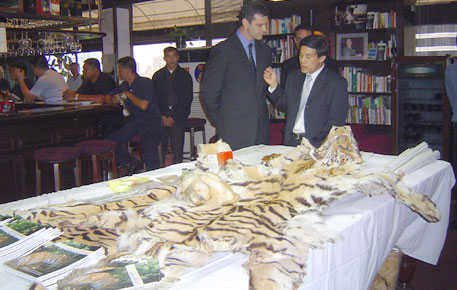 Vietnam has proposed a move that activists allege would boost tiger poaching across the world. The country has proposed legalising the use of parts of captive bred tigers that die of natural causes in traditional medicines. If approved, this is likely to spur demand for body parts of the big cat in the international market and hit tiger conservation efforts currently underway. The ministry of agriculture and rural development (MARD) of Vietnam sent the proposal to the prime minister of the country in March this year.

The disclosure has taken the international community, which is currently discussing a coordinated strategy for recovering global tiger population in New Delhi, by shock. The proposal was brought to the notice of the tiger range countries by non-profits when they were discussing the measures to eliminate the demand for tiger parts during the 1st Stocktaking Meeting of the Global Tiger Recovery Programme (GTRP) between May 15 and May 17. The conference was organised by National Tiger Conservation Authority of India along with the Global Tiger Forum, Global Tiger Initiative and the World Bank to take stock of the GTRP, which was adopted in 2010 and aims at doubling the global wild tiger population by 2022. Currently, around 3,200 wild tigers thrive in Bangladesh, Bhutan, Cambodia, China, India, Indonesia, Lao PDR, Malaysia, Myanmar, Nepal, Russia, Thailand and Vietnam.

Vietnam, however, did not mention the MARD proposal in its draft GTRP implementation report, a document each of the tiger range countries submitted to explain the actions taken by their governments for tiger conservation. The proposal is part of an investigation report prepared by the MARD on the wild and captive-bred tigers in Vietnam. Around 112 tigers are kept in breeding farms in Vietnam. “According to Vietnam’s law and International Convention, any activity of trading or using tigers and tiger products is prohibited. Tiger breeding facilities therefore can gain no profit. Moreover, because of the regulations against tiger trading, these facilities don’t have specific breeding purposes,” says the report. It further states that “dead tigers (from captive facilities) can be used to make specimens and traditional medicine on a pilot basis.”

But conservationists are not pleased. “This is in contradiction of the spirit of UN Convention on International Trade in Endangered Species (CITES) and GTRP. We want to give a clear message to Vietnam that if it goes ahead with the plan, we might have to take action against it in whatever capacity we can,” says Keshav Varma, programme director of the Global Tiger Initiative of the World Bank. The tiger range countries, including Vietnam, are signatories to CITES that prohibits the trade in tiger parts and derivatives, including domestic trade.

When asked, the representative of Vietnam’s ministry of natural resource and environment said the proposal came from a different ministry and he could not say much about it. He, however, hoped that the proposal would not be approved by their prime minister. “We are appalled that a few countries promise something else on international platforms while their domestic policies imply something else. If they allow trade of dead tigers kept in captivity, many tigers will be killed in the wild and their parts will be sold under the wrap of this scheme,” says Debbie Banks of UK-based non-profit, Environmental Investigation Agency.

Is China above board?

In the meeting apprehensions were also expressed regarding China’s domestic policies on captive tiger breeding and trade. For long tiger bones have been used in traditional medicines and wines in China. This had made the country principal destination for tiger parts from all over the world. In 1993, China prohibited the use, manufacture, sale, import and export of tiger bone products and products labelled as containing tiger bones.

However, in 2007, the State Forestry Administration (SFA), of China issued guidelines for the registration, labelling and sale of tiger and leopard skins of “legal origin.” “This seems to contradict China’s claim that trade in tiger parts is banned in the country. We have consistently requested clarification from China over just how many skins have been registered, how many have been sold under this policy, how many have come from captive bred sources, how many are reportedly from the wild and how legality has been verified. They have never responded,” says Banks.

China has also failed to meet the CITES resolution that it would take “measures to restrict the captive population to a level supportive only to conserving wild tigers.” The captive tigers in China have reportedly increased from 6,000 in 2010 to 9,000 now. There are allegations that the captive farms stockpiles the tiger bones and other parts of dead tigers. There is no transparency from China on where these stockpiles end up. “The issue of whether stockpiling of tiger bones in the captive farms in China is for research or for commercial use needs further clarification and is a serious cause of concern. We urge that China should follow the CITES resolution of keeping the captive bred tiger population restricted to support wild population in letter and spirit,” says Rajesh Gopal, member secretary of National Tiger Conservation Authority.