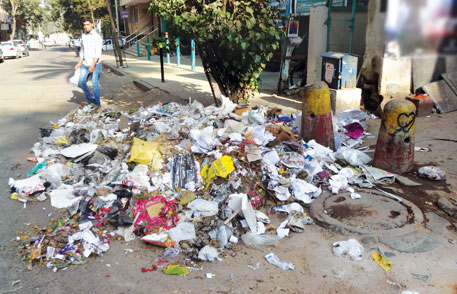 Residents of Mandur village, where Bengaluru city dumps about 1,800 tonnes of garbage every day, have decided to move court against the Bruhat Bengaluru Mahanagara Palike’s (BBMP) repressive tactics. The decision came late on the night of Friday, June 6, following BBMP’s move to enforce Section 144 of CrPC (banning unlawful assembly of people) near the garbage dump till June 10.

The village had closed down the landfill to more dumping on June 1 after the BBMP’s dumping contract with the panchayat expired on May 31. Section 144 was slapped on June 3. Village resident and one of the participants of the agitation against dumping of unprocessed garbage, Gopala Rao, said that government is adopting repressive tactics instead of addressing the villagers’ grievances, “The enforcement of Section 144 makes it clear that BBMP’s motive is to just dump its garbage, not to solve the issue.” He said garbage is being dumped illegally at the landfill under police protection.

In a plea to the chief minister, village residents have also demanded the suspension BBMP municipal commissioner Lakshmi Narain and state chief secretary Kaushik Mukherjee for having misguided the government on the issue of Mandur landfill.

The two above-mentioned officials, said a petition the villagers submitted to the tehsildar of the Bengaluru East taluka on Friday, had made public statements to the effect that the agitation against garbage dumping going on at Mandur since June 1 was a fake agitation being run by real estate mafia, and not residents of the village

Since it decided to put a stop to illegal dumping, the village has been at the receiving end of a spate of BBMP-sponsored repressive measures, said Rao.  On the night of June 2, as many as 23 residents were arrested, while another 85 were arrested next morning. On June 3, also, BBMP invoked Section 144 and placed a cordon of around 700 police personnel around the village. Those arrested were later released by the police, but villagers are being systematically terrorised by the constant presence of the police force, say residents.

The Mandur landfill, informed chief engineer in charge of it, Munnikrishna, receives around 1,500 to 1800 tonnes of garbage from Bengaluru city on a daily basis. He claimed that two private recycling plants, one with a 300 tonnes per day capacity, managed by Organic Waste India, and a second with a 600 tonnes daily capacity, run by Gayathri Shrinivas Resources, are operational in the landfill. DTE, however, found both plants not operational. Munnikrishna said that the Gayathri Shrinivas plant had been closed for maintenance for the past four months, while the Organic Waste India plant had been closed due to the current agitations. He said BBMP could not fulfill its promise of closing the dump by May 31 as other landfills were not ready.

Village residents, however, have firmly denied these claims, saying that both plants are non-functional. “When the landfill was started in 2006, we were promised scientific management of garbage, but since then, no recycling has taken place beyond token amounts now and then,” said resident Gopala Rao. “Government is paying Rs 2 lakh per day for spraying chemicals to reduce the smell and mosquito menace arising from the garbage, but spraying is done not more than once or twice a month. The entire government money is being pocketed by the private company and government officials.” He said that till date government has taken four extensions for dumping at the landfill based on false assurances. “This time we are determined to not let toxic dumping continue in our village,” he said.

He said that illnesses like malaria, respiratory and kidney problems have spread around the village since the dump was started and poisonous leachate has contaminated water sources, including tanks and borewells in the village and destroyed agriculture.