Nilgiri tribals and farmers without deeds barred from public hearing 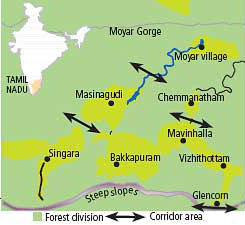 On february 8, shops in Masinagudi town of Tamil Nadu were closed. People in the town were expressing their solidarity with farmers in the area who are protesting their exclusion from public consultations held by the forest department on that day for demarcating elephant corridors in the Nilgiris that pass between villages (see map).

The department had invited only affected land owners to the meeting; about 3,700 people living on revenue land without titles were not allowed to enter the meeting venue. The patta lands mostly belong to coffee estate owners. The 3,700 small farmers, including tribals, will be evicted, said P T Verghese, a Masinagudi resident.

At the public hearing, the forest department presented a map showing the areas that fall in the proposed corridors.

The map included two settlements—Bokkapuram and Vazha-thottam. Verghese said this map is different from the corridors marked in scientific papers. Studies by biologists say there are four corridors used by elephants that need protection (see ‘Elephants to get wider passage’, Down To Earth, December 31, 2009). These corridors constitute only 202 ha as against the 2,428 ha the officials want to notify. N Mohanraj, project coordinator for Nilgiris landscape with wwf- India, said the map was drawn after consulting scientists.

The land owners have submitted their objections to the map at the public hearing. These will be reviewed and presented to the Madras High Court.