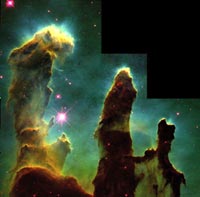 like most inventions, the birth of the Sun was also dramatic. It began not as a mere glimmer buried in an obscure cloud, but amidst the glare and turmoil of restless celestial bodies. So says a radical new theory. For years, astronomers have argued that the Sun and the Solar System formed in relative isolation, buried in a dark corner of a less-than-imposing interstellar cloud.

The new theory propounds that the Sun formed in one such massive region. Critical to the theory's argument is a recent discovery in meteorites. Researchers have found patterns of isotopes that are generated by the radioactive decay of iron-60, an unstable isotope that has a half-life of only a million-and-a-half years. Iron-60 can only be formed in the heart of a massive star. The presence of live iron-60 in the meteorites (which fall from outer space) shows that when the Sun formed (4.5 billion years ago) a massive star was nearby.

The theory is described in the journal Science (Vol 304, No 574, May 21, 2004). It has been propounded by astronomers and meteorite researchers of us-based Arizona State University. If validated, this vision of cosmic birth could have profound implications for understanding everything, from the physical makeup of the Earth to the development of the chemistry of life.