Virtual and real - but when?

The US government is, of late, Under pressure to pursue virtual environment technology aggressively. The outcome of the move could mean business houses trying out products not yet manufactured, or medical students taking trips through the human circulatory system 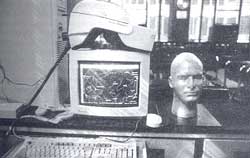 VIRTUAL reality (VR) is a concept which allows people to experience an 'as if world. In other words, computer programmes and imaging hardware create a three-dimensional world with which actual interaction is possible.

A report released by a committee of the National Research Council, an operating agency of the National Academy of Sciences in the US, expresses the view that despite the enthusiasm surrounding so called VR systems, there persists a large gap between the technology available today, and that which is needed to make virtual environments a reality.

According to the report, scientists lack the technology to achieve the same, unless the US government supports a broad-based programme of research on VR systems. The committee's chairperson, Nathaniel Durlach, a senior scientist at the Massachussetts Institute of Technology, feels that it is only the entertainment industry which is currently emphasising' on VR to make interactive TV and three-dimensional video games possible. But such efforts are not enough to render VR useful to many other vital fields. The committee believes that VR's potential is limitless. From helping explore outer space and ocean floors to conducting heart surgery, handling hazardous wastes or developing new manufacturing processes, it could work many wonders.

The report voices several problems that current VR systems and their use involve. For instance, there is concern over the discomfort of wearing and the poor quality of the images delivered by the currently available headgear. The committee adds that while technology in the US is capable of supporting the development of virtual environments connected through networks, it presently lacks the ability to support applications.

The study gives certain illustrations that provide one with insight as to the exact potential and possibilities offered by VR systems. One of these pictures a medical student using a special computer programme to manually interact with a virtual heart. Special visualisation technology enables the student to see, hear and feel the heart from multiple vantage points, and special controls enable the student to practice a variety of surgical operations on the heart. In another example, the study of cardiac movements in real humans has been imagined by using see-through displays that enable the viewer to combine normal visual images of the subject with real-time images of the pulsating heart derived from ultrasound scans. Indeed, if such possibilities are transformed into reality we could be opening up an endless number of exciting options.