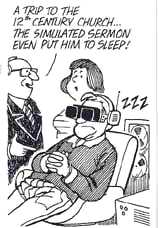 Virtual reality has done it again. It is now possible to watch a filmed "tour" of the Abbey of Cluny in France in all its splendour. The abbey, which was built in the 10th century, was among the largest of its time and destroyed after the French Revolution. It has recently been "virtually" reconstructed on a computer, with the help of records compiled by a Harvard architecture professor from excavations begun in 1928 (Science, Vol 261, No 5121).

The French virtual reality researchers have also used the simulation to make a "virtual abbey" that people donning a headset fitted with video screens will feel they are walking through.