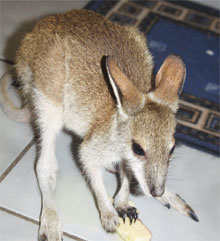 A wallaby joey has been rescued by wildlife officers after it was advertised for sale on Facebook by a man in Broome, Western Australia. It was rescued after a wildlife officer posing as a potential buyer responded to the advertisement.

The Facebook post offered to sell the animal for A $3,500 (about US $3,200). But there were bids of up to US $9,200 from overseas buyers. Wildlife officer Peter Carstairs said the man was likely to face hefty penalties. Carstairs said local residents concerned about the man’s actions had made complaints to the department, which led to the wallaby's seizure. “It is illegal to sell or possess any part of a native animal in Western Australia unless you have a wildlife licence. There is a black market trade in wildlife and it is a practice that must be stopped,” he added.