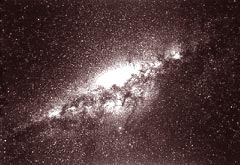 the Universe contains about 70 sextillions (70 thousand million million million) observable stars, according to an estimate of a team led by astronomer Simon Driver of the Australian National University. "This is not the total number of stars in the Universe, but it's the number within the range of telescopes," says Driver. Even so, 70 sextillion stars are about 10 times more than the estimated number of sand grains found on the world's beaches and deserts.

Using some of the world's most powerful telescopes, the astronomers took a representative sample by counting all the galaxies in a small region of the universe closest to Earth. By measuring precisely the brightness of each galaxy, they were able to estimate how many stars it contained and then extrapolated this for the whole universe. The calculation was made as part of the world's largest galaxy survey, the Two-Degree Field Galaxy Redshift Survey. Last year, Charles Lineweaver and doctoral student Daniel Grether of the University of New South Wales, Australia, calculated that the Milky Way galaxy contains about 300 billion stars, of which 30 billion are like the Sun.