Eat lots of fruits and vegetables to lessen pesticides’ effects 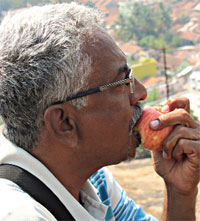 HAZARDOUS pesticides are often found, in small amounts, all around us. High vitamin intake can minimise the damage they can cause, say researchers. It can work as an effective antidote to pesticides’ toxicity.

Scientists at Gwalior-based Jiwaji University have found that a combination dose of vitamins A, C and E can prevent organophosphate pesticides from causing too much damage. Organophosphates are the most commonly available pesticides in India. They are used in agriculture and in households against head lice and parasites in domestic animals. Its exposure can lead to, among other things, neuromuscular paralysis.

Organophosphates can deplete the levels of catalase, antioxidant enzymes present in human body, and glutathione molecules. The depletion revvs up the level of harmful reactive oxygen species (ROS) like hydrogen peroxide in brain, liver, kidney and spleen.

To conduct the study, the researchers selected three organophosphate pesticides—chlorpyrifos, methylparathion and malathion. They exposed one group of rats to each pesticide for a day and the second group to a combination of the three. Two more groups of rats were similarly exposed to the pesticide after being given a combination of vitamins A, E, and C for 15 days.

The rats exposed only to pesticides showed significant decrease in the levels of coenzymes like NADPH (nicotinamide adenine dinucleotide phosphate) in the brain, liver, kidney and spleen. Coenzymes aid the activity of antioxidant enzymes and glutathione molecules.

On the other hand, rats fed with vitamins prior to pesticide exposure exhibited recovery of the coenzymes’ levels. They also showed better recovery of glutathione levels than the group not administered the vitamin dose.

Earlier studies have shown that vitamins A, C, and E can maintain the optimum levels of antioxidant enzymes and molecules which scavenge out ROS. Thus they can fight pesticide-mediated toxic effects. However, no study had probed the efficacy of a mixed dose of these vitamins in combating the toxic effects of pesticides’ combination.

Those who live in areas where pesticide exposure is widespread should consume lots of fruits and vegetables with vitamins A, C and E, suggests lead researcher Nalini Srivastava, School of Studies in Biochemistry, Jiwaji University. The study was published in the January 2012 issue of Ecotoxicology and Environmental Safety.