Apex court says it would examine all the aspects, economic, environmental and defence, in detail without staying any order issued by the tribunal

The Supreme Court on September 5 refused to stay a verdict delivered by the National Green Tribunal (NGT) in connection with the controversial Vizhinjam port project. Kerala had appealed against the tribunal's decision to judicially review the Coastal Regulation Zone notification issued by the Centre in 2011 and to see whether it should be amended to include Vizhinjam within its purview.

“If the Supreme Court starts staying the orders of the NGT, the tribunal will not be able to function,” said the three-member Green Bench of the Apex Court. “Economic and environment concerns need to go hand in hand,” said the bench.

The 6,500-crore Vizhinjam project is proposed to be built in Kerala’s southernmost district of Thiruvananthapuram by the Vizhinjam International Seaport Limited (VISL), a nodal agency set up by the state government. Despite having a lot of environmental and ecological issues, the project got environmental and Coastal Regulation Zone (CRZ) clearances from the Ministry of Environment and Forests on January 3 this year.

The Kerala government’s appeal in the apex court was against a significant verdict of the NGT delivered on July 17. In its verdict, a five-member principal bench of the NGT decided to look into the question of whether Vizhinjam coast be included in the CRZ notification issued by the Centre in 2011. CRZ refers to the coastal stretches of India and the water area up to its territorial water limit, excluding the islands of Andaman and Nicobar and Lakshadweep, where commercial activities are prohibited. The NGT bench, led by Justice Swatanter Kumar, also transferred the Vizhinjam case files to Delhi from the tribunal’s southern bench in Chennai. 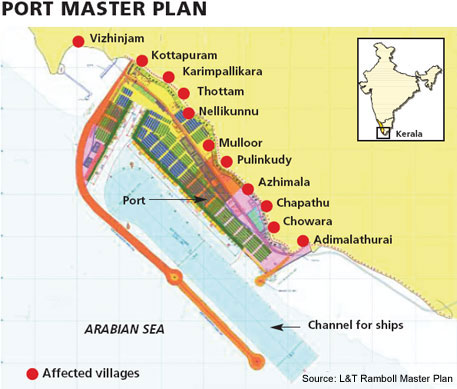 The NGT verdict was delivered while hearing a petition filed by Wilfred J and Marydasan V and residents of Vizhinjam coast and fisher community. They said the Ministry of Environment and Forests had granted the environmental clearance for the project without considering the adverse impacts of the proposed port on the rich, diverse, and pristine marine environment of the shore and the sea.

The project involves construction of breakwater, quays, terminal area and port building and is expected to be completed in three phases. The first phase is proposed to be built on 66 ha of land to be reclaimed from the sea. This phase requires seven million tonnes of stones, sand, soil and other material for the construction of a 3,180 km-long breakwater structures. The phase requires dredging activities in the sea.

The petitioners had pointed out that the construction activities will alter the ecology and affect the livelihoods of the fishermen community in the area that is already erosion prone. They also alleged that the public hearing for the project was not conducted in proper way. They had pleaded for a hearing with the Environment Appraisal Committee of the environment ministry but the committee refused to hear their views on the port project. They prayed before the tribunal to include the Vizhinjam coast as “an area of outstanding natural beauty” and “likely to be inundated due to rise in sea level consequent upon global warming” and, put it in CRZ-I category.

The Kerala government had filed an appeal in the Supreme Court against the NGT’s decision arguing that the tribunal had no power to direct the Centre to amend or rewrite its 2011 notification to include the Vizhinjam coast in CRZ-I. The appeal questioned the powers of the principal bench to transfer the case when it was in the stage of final hearing before the southern bench of the tribunal.

The project “is of great importance to the State of Kerala not only because of its national importance in strategic, military and economic terms but also because it will permit cruise tourism in Kerala, provide thousands of jobs, and contribute to the overall economic development of the State,” contended the Kerala government in its appeal submitted in the Supreme Court.  Kerala state further said that the site is 18 km from the Malacca strait, which is one of the busiest international shipping channels, and the sea water along the southern coast of Kerala near Vizhinjam has a natural depth of up to 22 metre. These two factors will enable the port attract big container ships.

The apex court bench said it would examine all the aspects, economic, environmental and defence, in detail without staying any order issued by the NGT which will hear the case on September 29. It has issued notices to the Union environment ministry, the Central Coastal Zone Regulatory Management Authority, and the petitioners.

Judgement of the National Green Tribunal regarding Vizhinjam Port Project, 17/07/2014